Win or learn (but mostly win!)

At the risk of making this a 10 million word essay, I’m going to try to cover everything that’s gone on at the MMA Academy during early summer.

I’ve had to skim over most things to condense it all into this short blog, so I’ll maybe talk over stuff in more detail next time I’m on the Kinny Vs the Hippy Podcast (which was supposed to be last week but Judith Chalmers aka Kinny is on his 8th holiday of the year.)

The month of May was eventful.
Especially Friday the 12th in particular.
We had 4 of the gyms MMA pros fighting on 2 separate cards.
Lawrence Fitzpatrick and Mick Bowman were in action on the Tanko 4 event in Manchester, whilst Tim Barnett defended his BAMMA lightweight title down in Birmingham.

Bowman was impressive. Back competing in the welterweight division, he was up against the bullish Kayvan Fallah.

Micky B in the house!

Mick matched him for strength, but Fallah could not say the same and match Bowman for technique, with Mick easily avoiding his opponent darting in and landing counter strikes at will.
The bout was called off after the first round, with Kayvan’s face a mess from Bowman’s spiteful attacks.

Headlining the show was Lawrence against the highly skilled wrestler Anthony Dizy.
I say ‘wrestler’ but to class Dizy as just a grappler is doing him a disservice. He’s got some impressive names on his ledger, and in his preceding fight had his arm raised against top 10 UK lightweight Martin ‘Stapes’ Stapleton. 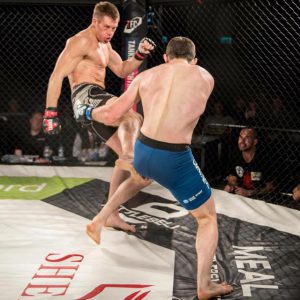 All action in the Tanko 4 headliner

After a gruelling first round, where Loz looked to strike despite his opponent being all over him like a rash, Dizy appeared in the driving seat by using his international pedigree wrestling (he’s ranked number 1 in his native France.)
Round 2 followed a similar pattern, but Loz said he could sense Dizy tiring. He was looking to come on strong and use his significant size advantage when a nasty shoulder injury gave Dizy the TKO win.

Take nothing away from the Frenchman, he deserved his victory and fought a hell of a fight.
However, it was an unsatisfactory ending, and it was surreal to see Loz in such a vulnerable position.
As the saying goes though, you either win or you learn, and the good news is that Lozza is healing well and has said the loss has lit a fire underneath him to come back better than ever.

Just recently he signed terms with Tanko, so look out for him making a big statement on one of their shows when he comes back later in the year. 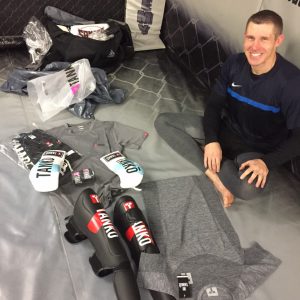 Loz with all the free gear he received after signing. All class gear, making me well jealous. Tanko – if you’re reading this, send some my way and I’ll give you a shout out in all my future blogs!

On the same night, Tim Barnett stood in the opposite corner to Mario Saeed in a defence of his BAMMA Lonsdale Lightweight belt.
It’s been said before, and will no doubt be said countless times again in the future…Tim is the nicest, kindest soul you could meet outside of the cage, but once that bell goes he’s a BAD MAN!

On paper, this was supposed to be a stern test.
Fights aren’t fought on paper though, they’re fought on canvas (with steel wiring criss-crossed all around!)
No disrespect to Saeed but Tim dealt with him emphatically.

When you see Tim finishing people like that it makes you realise how good he is.
Whatever ‘it’ is, Timbo certainly has ‘it’.

I can hang with him in sparring, and we suit each other greatly as training partners, as we’re the same weight but polar opposite body types.
Yet Timbo just has that X Factor that you don’t really see that often.

Styles make fights, I get that. But I could never see myself dealing with an athlete like Saeed the way Tim dispatched of him. Wow!

Onto me then, and I moved to 3 and 0 with a hard-fought (but unanimous) victory over Richie Bonallie on the Made 4 the Cage Show up in the North East.

I was initially happy with the win but watching it back I was disappointed that I looked like I hadn’t really progressed from the boxing style in my last 2 fights.

I suppose this was down to 3 things.

Firstly, what I was doing in there was working, so why change it?

Secondly, I had to weigh in 3 times for this show. There was a mix up and we didn’t know it was a same-day weigh in. Meaning the video weigh-ins I’d done Friday afternoon and Saturday morning weren’t enough, and I had to wrap up for the car journey up north and dry out until my final weigh-in at the venue.
I felt decent in there but I didn’t feel ‘amazing’, and when I landed anything of note I didn’t really have the ‘pop’ to follow it up.

Lastly though, credit has to go to the opponent. The teak-tough Bonallie was no mug and knew his way around the cage.
As happy as I was for getting the win, I’ve got to say I was more pleased with recently getting my blue belt in BJJ.

The happiness at the MMA win lasted about 2 days then I was back to wanting to improve and go again. Whereas with blue belt promotion, I was smiling all week. In fact, I washed my gi last night and still got surprised when I pulled all my gear out the machine and seen the colour a nice navy belt instead of a white one.

I made sure I hung it out on the washing line at the best possible angle so the neighbours would see the colour of it ha ha (nah it’s not like they’d be a rsed anyway!)

Tell you what, I can still remember how dry my mouth was during my shark tank when I was attaining it.
We’d had a run of warm weather and you’re not allowed a drink during the shark tank or iron man.
It’s one of the rare times I’ve been cursing the boss weather. I felt like an old man!
I used to see gorgeous weather and think “This is great, let’s get to a beer garden!”
Now when it’s warm I think “This is great, I can get my washing on the line!”

Back onto the Made 4 the Cage show and I wasn’t the only MMA Academy fighter who had their hand raised. My teammate Nicholas Santangeli also came through a 3 round battle to take a unanimous decision against the previously unbeaten Ruben Enjily.
I was immensely proud of Nic for this one, not least for his performance but also for the way he handled the situation.
The night before, when Jason told us about the mix up with the same day weigh in, Nic’s head fell off.
Me personally, I’ve been around the block with having 50 fights over a long career, so I just thought “It is what it is, let’s get on with it.”
But Nic was flapping about being weight drained and depleted, and add to that he was full of cold with a bad cough.

I said to my bird that night that I thought he was gonna pull out, but he surprised me and cracked on, and the reaped the reward from the risk as he overcame some threatening positions during the fight (a kneebar and a deep rear naked choke, against a purple belt as well) to move to 2-0.

Graham Mealand was next in action for the team at the start of June.

The G-Man makes his walk

It was the final of UKFC’s Middleweight tournament, and the G-Man was up against the Number 1 ranked Justin Burlinson, who produced some skilful jiu jitsu to get the armbar win in the opening round.
Again, the old adage ‘win or learn’ has to be put to use. In the changing room afterwards the team and Graham himself were talking about the mistake he made to give Burlinson the opening, but I’ll be honest I’m not as advanced as they are, and couldn’t see the mistake – I could only see the sublime jiu jitsu from the opponent.
I’ll have to watch it back, as I didn’t have the best of angles on the night.  One thing that did lighten the mood in the changies though was head coach Peter Davies.

Graham said “Sorry lads” to us afterwards…as if he had let us down or something.  Peter replied “Don’t be stupid, don’t ever say sorry.  If there’s one thing you need to be sorry for it’s that daft mask you wore for your walk out.”

Finally, to wrap up the MMA scene, the resurgent Chris Green continued his win streak with a TKO win on the new Cage Warriors Academy show in the Echo Exhibition Centre.
Granted, it’s not the fully fledged Cage Warriors, and it’s not the actual Echo Arena, but it’s as close as you’re gonna get and it’s a step in the right direction.

This show is predominantly amateur, and is sort of a feeder event to the main Cage Warriors roster. It’s ran by the team behind Shinobi FC and is something I want to be involved in myself in the near future.

It was good seeing Chris enjoy himself in there. He’s really coming into his own lately and I can see titles for him by the end of the year. 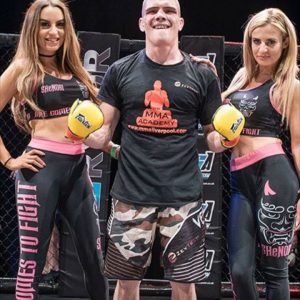 Have you ever seen one man look more happy than this fella?

Over on the BJJ front, we had a mixture of people competing during this period.
As brilliantly documented in Jay Owen’s vlog, there was a core of gym newbies competing in their first jiu jitsu tournaments, with excellent results. (It’s quite inspirational.  Have a look at the link.)

Going back to the same weekend as Loz/Bowman/Tim I mentioned above, Kev Corkhill fought a superfight and won by ankle lock.
It was actually a Tanko event again – this time a submission event on the Sunday. They done MMA on Friday, Muay Thai Saturday, and then BJJ on Sunday.
All in the same venue.
How good is that?!
Another shout for ya there Tanko – get some gear my way! Haha 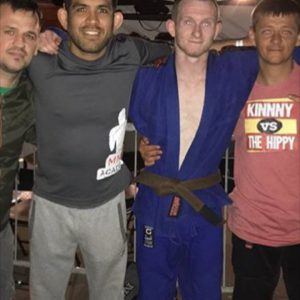 Anyway, Kev done what Kev does best. And that’s turn up as nonchalant as you can get, snap an ankle/arm or choke a neck, then get off home still all nonchalant like nothing’s happened.

The BJJ win-streak was rounded off by some of the senior members flying out to the Spanish Nationals in Madrid. 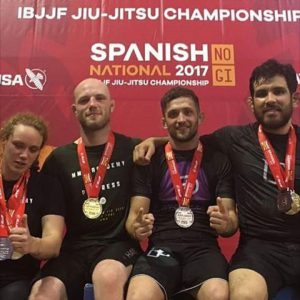 James Kirkham, Pietro Menga, Ashlea Austin, and the head coach himself Jason Tan all medalled out there to keep up this blog’s theme for the past few weeks – win or learn (but mostly WIN!)

Most importantly though, the most significant thing that happened in the spring/summer months was the passing of Academy member Tony Parker.

It’s often said that someone was a “big personality” after they’ve died, but in this case it’s certainly true, Tony was quite the character!
Loved and missed by everyone in the gym, amongst many other friends and family, he made me laugh every time I spoke to him. 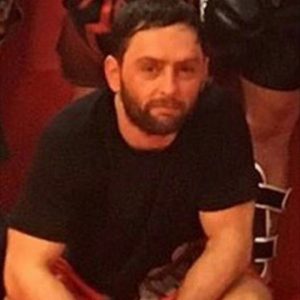 Testament to this was the turn-out at his funeral, where he had a cracking send off.

I’d like to dedicate this blog to Tony. Rest In Peace my mate, you’ll be sadly missed by everyone x

I’ve been training at the MMA Academy for the past 4 years and I’m a blue belt in Brazilian Jiu JItsu.…“