This weekend I attended one of the newest amateur events on the North-West mixed martial arts scene: the Shinobi MMA show at the Olympia in Liverpool.

I was there to support two fellow MMA Academy team members, but to be honest even if they weren’t on the bill I still would’ve dragged myself down there; such was the competitiveness of the matchups on the card.

My gym-mates competing were Tim Barnett and Mark Kinsella, and they both turned in excellent performances.
On top of those two there was a bit of an MMA Academy flavour to the whole show for me – as I’d recently trained with no less than 5 of the fighters on the card at some point or another down at our gym. I’ll get to that later.

First though, it’s gotta be said how well Kinny and Tim done. Like I mentioned earlier – the matchups were as competitive as they come.
I’ll start with Kinny.
Mark went into his contest with an unblemished 2-0 record, but in the opposite corner stood another unbeaten fighter. 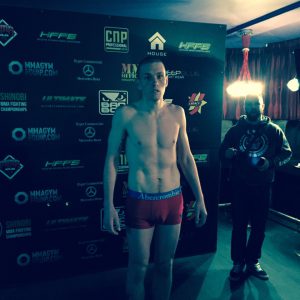 The fight was a tense affair, with Kinny doing enough in each round to take a unanimous decision.
It was good to see him back in action, good to see him get the victory, and good that it was against a ‘live’ opponent. I thought he got the better of the striking exchanges, and imposed himself brilliant with his grappling (against a top grappler!) 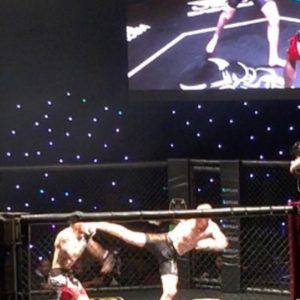 It certainly wasn’t the most spectacular contest of the evening, but all-in-all it was a very mature and composed performance that he should be proud of.

Out of everyone at the MMA Academy I’ve got to say it’s been Kinny that has impressed me most over the recent months.
I’ll be honest, when I first started down at the gym I didn’t realise how good he was as a fighter. Obviously I warmed to him straight away, mainly because of his personality, but recently I’ve kept a close eye on him and I’ve picked up loads.
I’m not gonna give away any of his favoured ‘moves’ (just in case any future opponents are reading this) but let’s just say if he takes you down then I’d put money on you not getting back up!
What impressed me most though was the shape he got himself in. It was his debut at 77kg and boy did he look LEAN!

Out of camp he can easily blow up in weight. He’s got a similar physique to myself in that he carries a lot of ‘junk in the trunk’ (a big fat ass and chunky thighs – you’ll never see either of us in a pair of skinny jeans!)

Since the turn of the year though, he’s really come into his own. And it’s no fluke this has coincided with his weight gradually coming down. He’s a big lad (standing over 6ft tall) and carries it well, but making weight is all in the discipline – something he’s definitely worked on.
Here’s a conversation I had with him during the first gym session back in January:-

ME: How’s the diet going Kin?
KINNY: Not good, I had eggs for breakfast.
ME: Scambled?
KINNY: No…Cadbury’s.

Them days are long gone now, with him following dedicated nutritional plans like The Dolce Diet as he looks to make his mark on the Welterweight division during 2015.

Moving on to Tim’s fight and we witnessed something we hadn’t yet seen during any of his first 5 contests: Tim being taken into the second round!
Seriously, the talent this kid possesses is frightening considering how short he’s been on the MMA scene. He’s now 6 and 0, with 6 early finishes.
His opponent on Saturday came to win. He was 4 and 0 himself, and fought out of a quality gym (Gunnar Nelson’s Mjolnir MMA) so we were expecting a solid test of where Tim was at beforehand.
And Mr Barnett only went and ‘aced’ that test didn’t he! 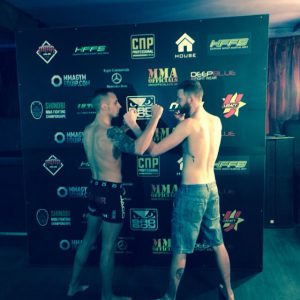 Like I just said, Tim was taken into the 2nd round for the first time (I’d even say he lost that first round, due to his quality opponent scoring two takedowns) – so found himself in new waters listening to head coaches Peter Davies and Jason Tan during the 1 minute interval.
Whatever they said in the corner worked a treat, as Tim came out all guns blazing for round 2. He was dominant from start to finish, and when the horn went for the end of the round his opponent struggled to walk in a straight line back to his corner; prompting the early retirement of the contest.

It was a statement performance for my old mucker Tim, and one that should make other Lightweights stand up and take notice.
I’ve mentioned in these blogs before the potential he has. He’s made for the cage, and training alongside him will only bring me on, especially seeing as there’s not much weight difference between us, and the competitive spars we have. No one down the Academy has landed more punches on me than he has – his fists have found a home on my face, it’s like his left jab lives on my forehead and his right hand has squatter’s rights on my chin! 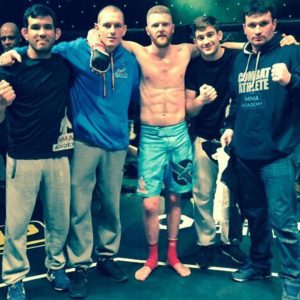 The other fighters with an MMA Academy connection were Manny Akpan, Connor Hitchens, and the main event fighter- Gavin Hughes.
Manny trains out of SBG Mainline in Manchester, he’s a scouser who’s in uni down there, and when he has a break (for instance: half-term or summer holidays) he gets his training done locally with us.
He put in a devastating performance on Saturday, taking home stoppage of the night after less than 60 seconds.
Connor was unlucky to lose his unbeaten record to the quality John Shinks, for the Shinobi Flyweight title. I’ve had a fair few wrestling spars with young Connor and he’s definitely the real deal. He’s got time on his side anyway, so I’ve no doubt the kid will bounce back better than ever.
Gav Hughes was topping the bill and prevailed in a fight of the night Lightweight contest with a unanimous decision. He’s been down the MMA Academy the odd Saturday for some shoot-box sparring and I was fortunate to get a round or two out of him while he was there. A dead nice lad who looks like he has all the tools to go a long way in the MMA game.

On the whole it was a class show from start to finish. I was there with my good mate Adam McGahon, supporting Tim and Kinny – the other #TeamGinger members of the Academy (myself and Ad are the founder members!) and we both remarked that we’d love to fight on this show in the near future.
My own MMA training has taken a bit of a back seat at the moment (with the approval from head coach Jason), due to awkward shifts in work and concentrating on boxing for the upcoming ABAs in a few weeks. I’m still ticking over by getting down the Academy a couple of times a week, and felt like I played my part in training alongside Kinny and Tim for their wins (especially during the hellacious “up/downs” of a Thursday.)
But like I said, once I’m back in the swing full throttle I’d be delighted to be involved in such a well-ran show as this Shinobi event. Not least for the handsome win bonuses they pay out!