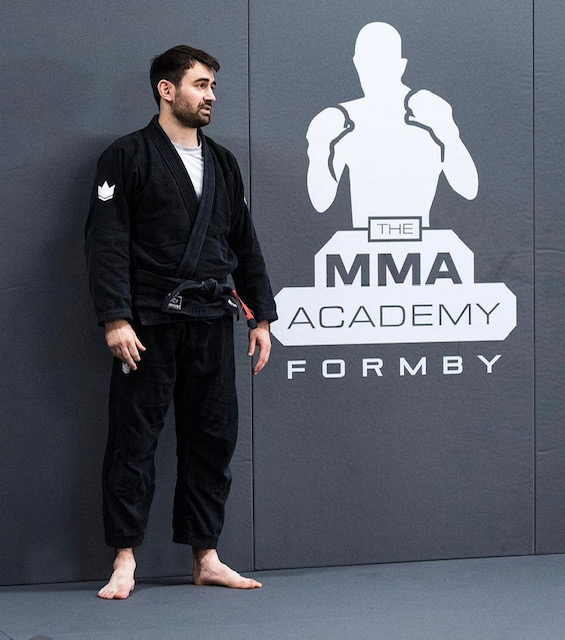 It’s been quite a while since I last put pen to paper. These blogs originally started out with the subheading ‘Boxer’s transition to MMA’, after the Academy’s head coach Jason asked me to document how I made the move from the ring to the cage back in the day.

It was a great journey, a successful one, loads of new friends made, a few title fights on big shows, loads of yo-yo dieting. The subheading for any blogs from now on should read ‘Ripped vegan cage fighter’s transition to fat cake-eating firefighter.’

Getting back in the gym was an eye opener. There’s a lot of new faces, which is to be expected seeing as it’s over 3 years since my last fight.  A lot of new talent. But also, the same group of lads I used to train with have gotten better.  Much better!

The likes of Michael Thompson (Lefty) and Connor Hughes have ripped through the lightweight division (my old stomping ground) and now have fledgling pro careers.  There’s Harvey Roberts and Layton Kane who are churning out win after win.  And then you’ve got the KC trio – Connor Walsh, Charlie Balmer and Kurtis Campbell.  Young Kurt deserves a blog all to himself to be honest, such is the astronomical rise he’s been on the last year.

These KC three fleet between us at the MMA Academy and the Kirkby gym, KC Fightbase.  They represent the both of us every time they step in there, such is the closeness of the two gyms and how we’re now intertwined.  It’s a massive recipe for success: iron sharpens iron, as the saying goes.

Working closely with other combat gyms has always been a positive down at the MMA Academy. When I started, I remember we had a few link ups with Martin’s MMA down in Derby. And to quickly recall a few more off the top of my head, I’ve got to mention Reps MMA in Preston and IPC in Wrexham. Reps are brilliant, and provide the backdrop of the UKFC promotion – some of the best shows in the UK, and one that our Academy fighters always do well on. And as for IPC,  there’s not much I can say about Aaron Aby in one sentence without doing him an injustice.  Again…this fella deserves a full blog to himself. A real life Superman!

So whilst talking of link-ups with other gyms, it leads me nicely onto the subject of MMA Academy Formby.

It’s no secret that the MMA Academy keeps on getting bigger and bigger. In 2018 we had to relocate down the road as we’d simply outgrown the old gym. Now…there’s another MMA Academy open in Formby, which is owned and ran by head coaches Mike Wootten and Jay Owen.

Last week, MMA Academy Formby held an open day, which was a roaring success. I went down for some bbq food but got there a bit late and missed all the scran 🙁 Nevermind, it was good to mingle – it was absolutely chocker and in the middle of the recent heatwave we just had.

Whenever we have nice weather in Liverpool, there’s a list of about 3 people who will always text me “Great day to get the washing out!”  (I don’t hide the fact that I absolutely LOVE getting my washing on the line) – and Mike Wootten is one of those people.

But the MMA Formby open day was that busy that we didn’t even speak absit hanging our undies out once!

Seriously, the location for this new branch of the MMA Academy is absolutely spot on.  The exact address is Unit 54 Stephenson Way, Formby, L37 8EG, and I’ve attached some action shots* from the opening week or two of training.

It’s a really family friendly gym, and there’s free tastier sessions available if anyone wants to get down for a nose. Incidentally, the gym’s first member to sign up was one of my best mate in work’s lad, Oliver.  I had no influence over this, his mum just took him down by chance, which shows the vibe in the really sells itself.Progress never sits still, and this looks really good for the MMA Academy name going forward.  I think it will snowball.

It feels like we’re on the cusp of something special – Last year we had Connor Hughes, Ste McLelland and Ant Jones with highlight reel knockouts that I sometimes watch on loop!  Forget about KO’s though, for me, the biggest statement wins for the gym have been when Tim Barnett stopped Rhys McKee in a round, and when Loz Fitzpatrick submitted the legendary Charles ‘Krazyhorse’ Bennett. That’s just my personal opinion though.  I got goosebumps on both of those moments. We also hit the bar when Mike Wootten just missed out on a UFC contract following his memorable stint on The Ultimate Fighter.