Kickboxing at the Academy 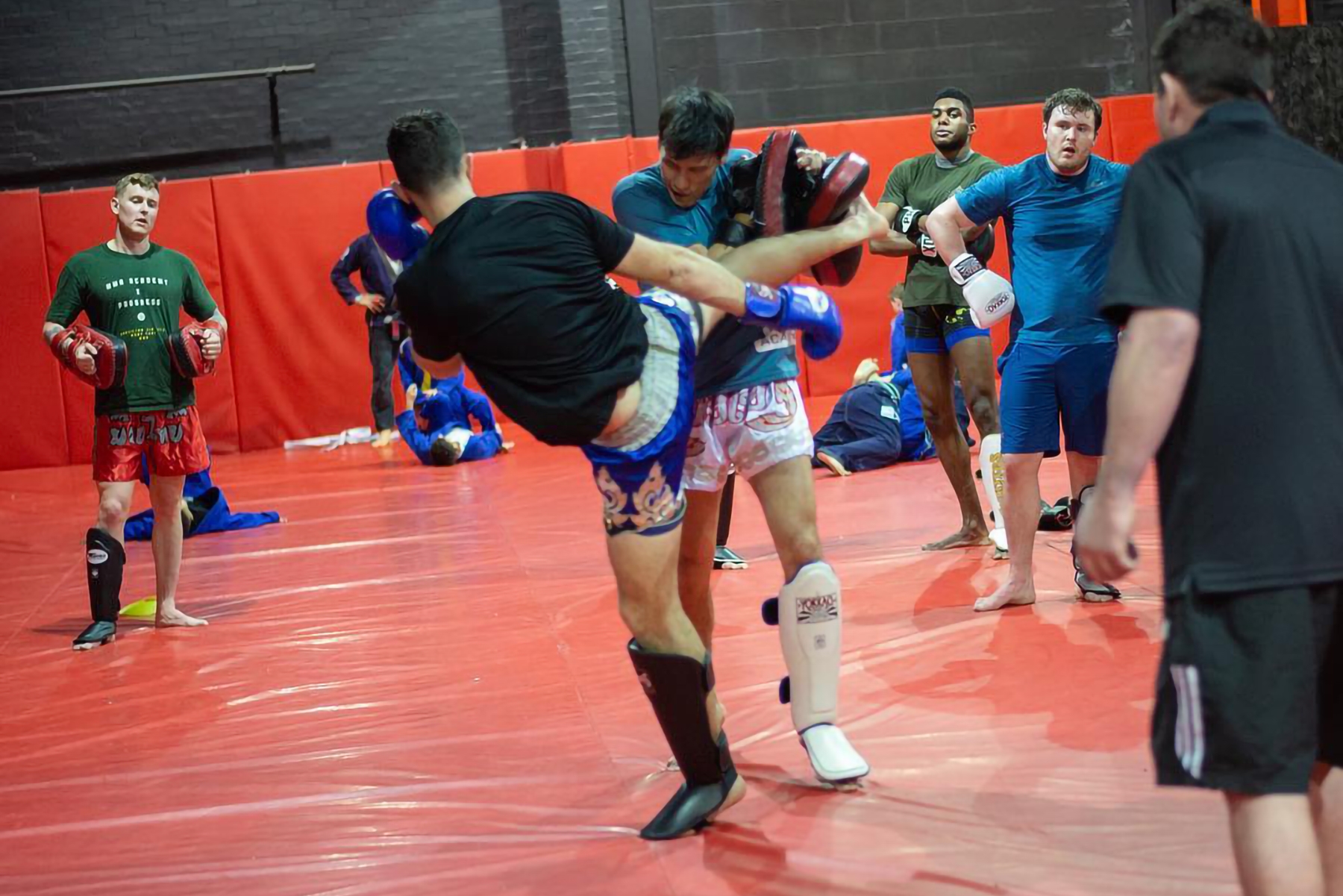 I’m no MMA ‘expert’ by any stretch of the imagination, but I get the impression that the sport goes through periods where certain fighting styles become latest trend to show success.

When the UFC was first incepted, Jiu Jitsu was all the rage, with the Royce Gracie exploding onto the scene and subbing everyone.

Then the likes of Randy Couture, Mark Coleman, and Dan Henderson brought wrestling to the forefront.

And just like Jiu Jitsu, wrestling has since then always played its part.

It was once an effective tool that gave a select few a distinct advantage, however nowadays every fighter’s wrestling has to be nailed down in order for them to compete at elite level, such is the importance of grappling through transitions.

Currently, with the likes of Steven ‘Wonderboy’ Thompson and Yair Rodriguez coming through, it appears that Karate/Kickboxing is now forming a wave as the dominant fighting style within the cage.

Down at the MMA Academy, we have a comprehensive Muay Thai programme that encompasses all levels – from foundation to coaches who are/were professional fighters.

We also have some members who prevail from backgrounds of kickboxing and freestyle karate.

If you don’t yet know who Connor Hughes is, then trust me, over the next 12 months you probably will.  And if you don’t know who Lawrence Fitzpatrick is then you must have been living under a rock these past few months.

Anyway, back to my earlier comment about coaches at the Academy and we have a healthy mix of amateur and professional fighters, a women’s coach, and also coaches who choose not to compete…all overseen by head honcho and former champion Peter Davies.

Of those aforementioned Muay Thai coaches, special mention has to go out to Chris Green.

Here we have a guy who has turned his MMA career around.

Once seen as mainly a grappler due to his impressive physique, he has knuckled down and dedicated so much time to his striking over the years.  It’s testament to his willingness to learn that that he’s now a quality Muay Thai coach at the gym.

Chris came to us with a mixed amateur record, and by his own admission was short on confidence.

Fast forward 3 years and he’s now competing in a more natural weight class (2 divisions below what he used to) and is fighting for titles against top lads.

He’s also one of nicest guys you could meet…I once hit him with an overhand right in sparring – the shot landed on the top of the head and I winced in pain as we were only wearing little gloves.  Chris kept saying ‘sorry’ to me when he seen the pain I was in.

Hahaha picture that…it was me who hit him, and he’s the one saying sorry! 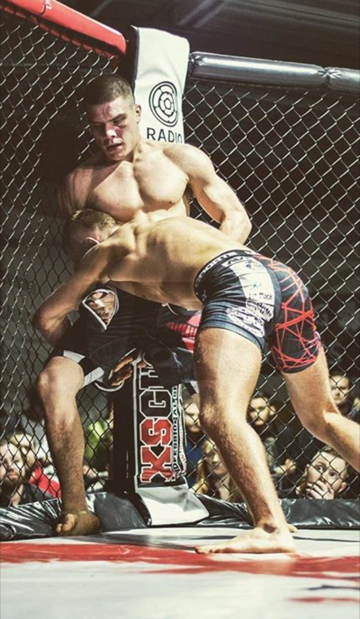 Throwback to when a silverback gorilla escaped from Chester Zoo, shaved all its body hair, and wandered down the Olympia to fight MMA!

Chris’s most recent appearance was at the big Shinobi show that Kinny topped, where he took the scalp of an unbeaten opponent.  A performance that should move him up the rankings nicely!

I really enjoyed this fight, as I spent the whole day with Chris in the lead up.

People who’ve competed will know what I’m on about when I say that ‘fight day’ really is the one day where you need your gym buddies around you.

God love your friends and family, but they can’t really relate to what you’re going through, so it’s nice to be in the company of your teammates.

With that in mind, me, Darren Culshaw and Kev Corkhill picked Chris up and went to Nandos for a pre-fight scran.  (I nearly referred to it as a ‘cheeky’ Nandos then, but I just couldn’t, even my fingers started cringing as I was typing on the keyboard!)

We then headed back to DC’s to watch a few vids of Chris’s opponent.  Obviously all this had already been done by the Tan Man (and in far more depth than we would be able to spot) but it was reassuring for Chris to be sat there going over a few last minute things and pick out some opportunities.

Darren done the same for me on my debut last year and it really helped on the day, so I wanted to pay it forward with Chris.

The Green Machine ended up putting in a really good performance to win every round, displaying solid MMA skills and even earning a new nickname – The Filipino Zombie!

His powerful inside-game when he gets attached is now even more polished with the kickboxing attributes he’s added over the past year.

It’s a style that I am trying to mould into myself.

Week-by-week I try and tinker my game a little more in that direction.  Be it adding a few more kicks or shooting for a couple more takedowns, I’m slowly moving away from the ‘boxer’ status.

I would say that coupled with the kickboxing aspect…the Conor McGregor style could possibly be the next ‘thing’.  A lot of the SBG fighters currently adopt this ‘flowing’ approach.

Personally, I think you’ve gotta do what works for you.

For instance, look at Artem Lobov.  Here we have a man who is probably Conor’s main sparring partner, and you can see he’s trying to emulate that same style.

He has marginal success with it, but his body shape isn’t really built for it and when the going gets tough he always reverts to type of being a slugger and having a tear up.

I’ve experienced this with amateur boxing.  Being the loyal kid that I am – I had every one of my fifty bouts with the same amateur boxing club.  In that time, I’d seen coaches come and go, even different ‘head’ coaches at the gym (which meant the training methods and style were dictated completely different.)

When I started, I had a poor record, with a lot of unnecessary losses.  I would say that’s part due to being inexperienced an impressionable, and being told to ‘box to order’, to a style that just didn’t suit me.  A former head coach had us all boxing to his own personal style.  A style which consisted of long, straight shots: point score and move away on the back foot.

Now if you’re reading this blog you might not have seen me, but I’m a shade over 5’8” and used to box in the middleweight division (75kgs) which meant I only ever faced one opponent (out of 50) who I was taller than!

It wasn’t until a change in head coach personnel that I started to put some successful runs together.  The new head coach had everyone boxing to the style that suited them.  I was told to pile forward, bury my head on my opponent’s chest, and unleash short fast combos.  It worked, and it worked well!

Which is why I think we’ve got a great set up at the MMA Academy.

The Tan Man is exactly one of those coaches.  He recognises no two fighters are the same.

For instance: myself and Tim Barnett both fight in the same weight class.

If you seen the pads that Timbo gets compared to the Pads that Jason gives me, you will notice the shot selection is A LOT different.

Keeping the subject on me (suppose it is my blog after all, haha) – I had a brilliant end to the week as I was promoted to blue belt level in BJJ.

It came during a lunchtime class and it was completely unexpected!

Due to it being a daytime session, it came in a Shark Tank format rather than the usual Iron Man.

They’re both just a rite of passage we use at the MMA Academy, and the fact you’re reading this blog means you probably already know the difference but if not I’ll quickly explain:-

An Iron Man is where everyone in the room lines up in belt order and the person being upgraded rolls in the middle until there’s a submission, then the next in line jumps in.

With a Shark Tank, it’s similar principles however it’s a fixed time period for each roll.

In theory – an Iron Man could be done in half the time, if the submissions come quick.

Whereas during the Shark Tank you know you’re gonna be in the middle for at least an hour no matter what!

It started off brilliant: tap, tap, tap…but then time passes, the belt level of your sparring partner goes up and your energy levels go down.

Suddenly the moves that were tapping people stop working and your brain starts panicking.

You’re not allowed a drink throughout, so by the end my mouth was dryer than Gandhi’s flip flop and I was cramping every 5 mins.  It was one of the toughest lunchtimes I’ve spent and I went back to work like the tin man, but it was worth every second and (training-wise) has been the highlight of 2017 for me so far. 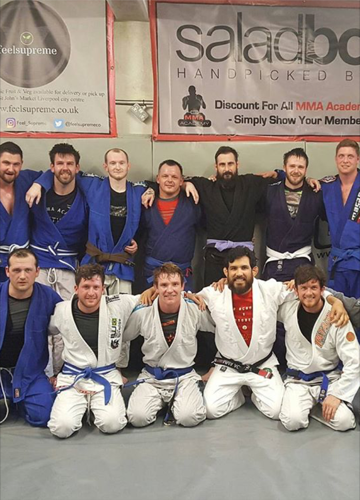 The team who put me through my shark tank

During an old blog I wrote that it seemed whenever someone gets promoted in BJJ they seem to sub-consciously raise their game in training.

Hopefully that’ll happen to me.  I’m currently scared of being found out a fraud, and demoted back to white belt!

Finishing the week off I have to mention the video blogs that coach James Owen has started putting out there.

It’s a great idea, focusing on training techniques and showing the gym in a really good light (which is exactly how you’ll find it.)

If they encourage people to get training then they are worth their weight in gold.  So feel free to share them with anyone you know who is curious about taking the plunge.

If I’m getting technical then they’re actually called a ‘vlog’ and not a blog (which I think is the ‘techy’ term for a video blog) so Jay Owen or Jason if you’re reading – stop referring to them as blogs!

Maybe I shouldn’t be so pedantic, as I don’t want to upset Jay Owen with these whopping new shoulders he’s been sporting.

Either his t-shirts have shrunk in the dryer or he’s been pumping serious iron, knowing that he’s on camera in these vlogs.

You can catch the first one here.