BIG month for the Academy

So February 2017 was eventful.
The month brought probably the biggest period the gym has ever had.

Don’t get me wrong – the MMA Academy is no stranger to the big stage.
When I first joined the gym, Mike Wootten was on the cusp of the UFC, reaching the semi-finals of TUF: the Ultimate Fighter.
And just last year, the gym’s leading flyweight, Pietro Menga, scored a highlight-reel KO on possibly the world’s second biggest MMA promotion – Bellator.

Not to mention the numerous amateur titles that are littered around gym members. Most notably Tim and Kinny with their collection of Shinobi and FCC titles, and if you go back a bit further then Chino had quite a few belts when I first set foot in the Academy.

In my opinion, though, last month eclipses all that.
Lawrence Fitzpatrick, our resident hardcase, took centre stage at the main event for Tanko 3.

In the opposite corner was a bit of a legend of mixed martial arts…none other than Charles “Krazy Horse” Bennett.

When the fight was first made, no one expected it. Loz himself couldn’t even believe it, and spent a lot of his training camp anticipating a late change of opponent.

Let’s be honest, the UK laws on letting people with criminal records into the country didn’t bode well for a man who now goes by the name of ‘Felony’.
But low and behold, the MMA veteran of over sixty fights was photographed walking around Manchester the day before the weigh-in, and wearing a Man U shirt for good measure!

The fight itself ended in the first round, with Lozzer securing a rear naked choke after an exciting battle fought mostly on the floor.
The exchanges proved two things:-
1. Loz is a BEAST just as much with his grappling as he is at stand-up (something I’ll vouch for personally)
2. Krazy Horse is one of the toughest mo-fo’s to walk God’s green earth, the way he held on and fought out of some horrendous positions.

If you haven’t seen the fight yet, you can catch it here.

Felony was even talking to Loz during the fight (some humorous words that aren’t really suitable for publishing in this blog) and the experience of topping the bill against a marquee opponent should open a lot of doors for our very own ‘Wonderboy’.

Sitting there cageside, I’m not ashamed to admit I got goosebumps at the end when Loz’s hand was raised and there was a confetti explosion. It was one of those moments you just don’t forget.

On the same card, Tim Barnett blew away Onur Calgar in under a minute to move his professional ledger to 3 and 0.
Now, I don’t know whether you know or not, but if you’re familiar with Tim, then you’ll no doubt be aware he is a vegan.
And like any good vegan, he can’t go 5 minutes without telling someone he’s a vegan.

Joking aside, it’s thanks to his clean lifestyle that he was able to put himself in the right place at the right time.
The following week, BAMMA, one of (if not the) biggest UK promotions, were staging their next blockbuster show in Belfast.
Hometown star Rhys McKee was set to defend his Lonsdale lightweight title until an injury to Chris Stringer left him looking for a last-minute opponent.

The fight was originally offered to Loz, but the poor lad had badly damaged his ribs during his tussle with Krazy Horse (I mean, is it any surprise – did you see that slam in the vid above?!!)
Tim has always been an advocate of not blowing up in weight immediately following a fight.

Me and Kinny were ripping him last year when mentioned he was feeling guilty after indulging in his post-fight ‘treat’ – some nut butter, banana or dark chocolate.

By the end of a fight night Kinny has usually stuffed a full 12 box of Krispy Kremes down his throat, whilst I’m in the chippy ordering 2 x of everything on the menu.

Thanks to his organic lifestyle, Timbo was available to step in when opportunity knocked.

The opportunity came and he grabbed it with both hands, took its back, secured the seatbelt with hooks, and choked the living daylights out of it!

McKee is highly regarded in UK MMA, and rightly so.
With a massive 6’2” frame for a lightweight, the man known as ‘Skeletor’ was almost identical and perfectly matched for Tim, posing some new problems.

Myself and Ad McGahon were mentioning there is an oft-used phrase in boxing circles that someone is the nicest man you could meet, but turns into a killer once they step through the ropes.

Well Tim Barnett is the single most perfect example of this.
We’re talking about a lad who used to be too polite to take a pair of jeans back to the shop if they didn’t fit him.

Yet once that cage door closes, the switch flips, the Jekyll and Hyde persona changes, and he becomes a bad, bad man – just look at the elbows and dirty boxing during his clinch-work in the vid.

You can’t teach that killer instinct, you really can’t. Trust me, I know. I wish I had it myself.

When Timbo smells blood he’s all over his opponent quicker than Jason is all over a deal with discount attached.

The victory was sensational and just like Loz, Tim announced himself on the pro-scene in style by making history with our first BAMMA title.
Walking around the SSE Arena with the belt after his performance, Tim was asked non-stop by Irish fans to pose for pictures, and even made the national newspapers the next morning! 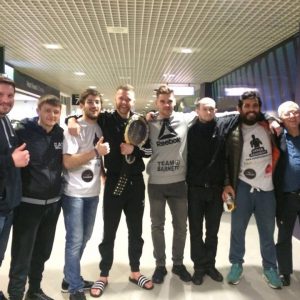 I started the blog by stating February was one of the biggest periods the gym has ever seen, and in that I also include the pro-debut of Mark Kinsella.
Ok, it’s the polar end of the spectrum to what I’ve described above.
And ok, Kinny never got the ‘W’, but it’s not all doom and gloom.

He was topping the bill on an awesome show (Shinobi) in his first professional fight against a solid opponent in Mick Stanton, who nailed his tactics and fought a perfect fight.

Receiving your first loss is hard under any circumstances.
I was inconsolable myself after my first loss in amateur boxing. I felt like the world had ended, and that was back when I was a spotty 17 year old following a points defeat at a meffy little sports centre.
For Kinny to succumb to defeat the first time after a glittering amateur career, and for it to happen under so much scrutiny under the bright lights of a sold-out Olympia…well that is character building to say the very least!

I’ll go into this a bit deeper in my next blog as I’ve got loads to say on the matter, and I’m conscious of this one becoming a bit of an essay, but if you’ve got time then check out this quality Kinny Vs The Hippy podcast which illustrates both the fighters mind-sets around their defining fights.

The gym’s good run continued into march as we had Nic Santangeli (Joey Essex) winning his MMA debut, and Graham Mealand winning the semi-final of his 4-man tournament, both first round finishes and both by choke (Rear naked and Marcelotine, respectively) at Ste Nightingale’s UK Fighting Championships in Preston.

Then we had Aaron Aby with a hard fought decision ACB in Manchester, and there was also highs for the Brazilian Jiu Jitsu team bringing home numerous medals from numerous tournaments, the highlight being Kev Corkhill’s superfight win on Empire Grappling (a prestigious competition formerly known as Grapplenation.)

After a recent BJJ class, Jason said that this is looking like the start of something big for the gym, so let’s all get involved and ride the crest of the wave.
Here, here!