MMA Womens Membership on the Up

It’s been a few weeks since I made my return to training at the MMA Academy.
I’d been AWOL for two months. That last fight I had left me with a badly broken nose, so it was doctor’s orders to avoid any contact for a good while.

Usually I’d still be able to roll with a bit of BJJ, and just avoid the punches/kicks in MMA sparring.
But this one felt different.
This one felt like my front teeth move whenever I touch my nose.
Head coach at the Academy Jason Tan was understanding when I told him I’d be missing for a while.
“I’ve broke my nose in two places” – I said

“Then you really should stop going to those places” – he replied.
I’m just kidding but to be fair I’ve had my fair share of bust noses throughout my fighting career. It’s been nearly 20 years since it first broke in a sparring session.
My schnozzle now looks a bit like it belongs to Cyril Sneer, if you remember him? The baddy off that 80’s cartoon show The Racoons (I’m showing my age here!)

While I was away from the Academy I was ticking over in general fitness gyms.
Oh my word! I just can’t live that life.
No disrespect to anyone who’s sole training routine involves lifting weights and cardio. I like it now and then, to compliment my combat training, but after a week or two it’s just depressing.
I had a lot of guest passes for the David Lloyd gym in Kirkby, and while I’m in there I actually get wound up at all the funboys and juice bombs, however nice they might be!
You’ll often find me on the treadmill, snarling at everyone like Clubber Lang in Rocky III.

So it was a breath of fresh air to get back rolling and sparring again last month.
While I’ve been gone I’ve noticed a few slight changes.
A bit of refurbishment, new flooring/tiles, a lick of paint here and there. The gym’s looking lovely!

What I’ve noticed the most though is the healthy turnover of new members.
It’s no secret that I speak very highly of the Academy to anyone who’ll listen.
If I see any newbies in the changees I’ll always make an effort to get chatting to them and make them feel welcome. The more people that take up the sport the better!

And within all these new members, it’s great to see that not all of them are male.
As the sport evolves, more and more women are taking the plunge.
Obviously, 99% of the females down the Academy aren’t looking to be the next Ronda Rousey.
Getting fit, gaining confidence and learning self-defence are probably the goals most of them strive for, rather than stepping into the cage. (Actually, that goes for the fellas as well. We’re like a ‘family’ gym. Most guys train at the Academy for exactly the same reasons, with probably less than 5% of members actually fighting MMA.)

Anyway, we’ve always had a pretty solid nucleus of female members.
In the early days, it seemed (to me) to mainly consist of the partners of the male members/fighters/coaches. Girls like Tammy and Jayne, keeping an eye on Peter Davies and Pete Angell ha ha.
For a short period we were lucky to have regular appearances from Christine, a BJJ brown belt from Martin’s MMA in Derby.
Obviously the classes at the Academy are mixed and open to everyone, but with Christine’s help we were able to put on women’s-only BJJ sessions…which surely sped up progress (and are still available to this day.)
The Jiu Jitsu programme saw the likes of Karen and Ellie competing in tournaments, medalling, and eventually progressing to Blue Belt status.
Things were looking good, moving steady.

But lately, I’ve noticed an abundance of new faces.
The Muay Thai classes are flourishing. I really can’t keep track of how many enthusiastic new faces are stepping on the mat (male and female.)
The jitz classes are still bouncing.
There’s even now a judo class, which is taken on a Friday night by Ashlea – a judoka black belt who’s making the switch over to MMA and is one to watch out for in the future! 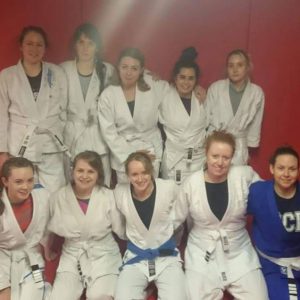 Some of the new members to the BJJ squad

Ha and on top of all the new girl faces mentioned above, we’ve still got that nucleus of male members’ partners that make up some of the numbers – coach Matty Crozier must enjoy it when his missus Lucy is in his Thai class…one of the few time he gets to be in charge in the relationship.

But seriously, it’s great the way things are coming together and snowballing with the women’s memberships on the increase. It’s having a domino effect, with even Olivia from reception getting stuck in. The team keeps on growing!