It feels weird still calling this blog “Boxers transition..”  The transition is complete.  When people ask, I no longer say I’m a boxer, or even the commonly used “I used to box but I’m doing MMA now”.  If they ask, I just stand there and adopt the ‘Crane Kick’ stance from the end of The Karate Kid And they soon catch on.  I’m only messing.  When I started these blogs off Jason categorised them under that heading on the site, and it’s sort of stuck, to identify it as one of ‘Seddos’ blogs (as there’s blogs on here from Tim Barnett and Jason Tan himself, amongst others.)

As I’m typing this now, it’s 5am on Saturday morning, I still haven’t slept.  I expected this though.  Earlier this Friday evening I just had my https://youtu.be/nbOVVm2qdzw on a brilliant Ice FC card at the Macron stadium in Bolton. I won a split decision, against a teak-tough undefeated opponent from a top gym.  A big last round sealed the victory after a slow and nervy start.  As I said – I expected this night of insomnia.  Win or lose, forget the snooze.

Win and you’re on cloud 9.  If I could bottle and sell the feeling that I’m experiencing right now I’d be richer than Bill Gates, than Donald Trump, than Mark Kinsella.
On the flip side: lose and it’s a night of “Shoulda/coulda/woulda’s.”  I’m knackered but smiling. Happy head and a FULL belly!  If you’re planning on going the Home n Bargain in Bootle strand for sweets then don’t bother. I cleaned the place out the other day in anticipation for this.  Operation Diabetes is in full swing tonight.

As I said at the start, I no longer class myself as a boxer, but my vast experience with Transport ABC helped me.  The Head coach there is very similar to the Tan man in that he’s young (can still go out on the ale with him without looking like I’m out with me dad) yet I proper look up to him.  Going into that Last round tonight I was finished. I was shattered, felt like I had nothing left.  But in the previous round I could feel my opponent wilting under the body shots. He was just as tired as me. So in between rounds I started jumping around and blagged I had a lot more energy than I did. A bit of kidology to break him. Suppose that’s the experience of over 50 fights.  Forgive me if I sound like I’m blowing my own trumpet. I usually talk myself down, I feel awkward receiving praise, but tonight I KNOW if I didn’t dig deep I’d be sitting here crying into my large donner kebab (and meat feast pizza with cheesy chips).

I’m now 2 and 0 in the cage. Undefeated baby!  I won over 30 out of 49 amateur boxing contests (at very good level might I add.)  Not proud but come out on top in most of the stupid drunken scraps I’ve ever had in/outside boozers in town.  And I’m about 250-0 in my record of WWF wrestling with younger brother and sister as a kid.

Seriously though, all that experience pushed me on tonight.  My head could have went on numerous occasions.  Even from 2 weeks out when I got my opponents name.  I know it means nothing but I had a little check on him and seen the Tapology rankings.  Have a look. He’s a good few hundred places above me. 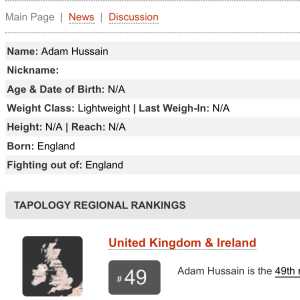 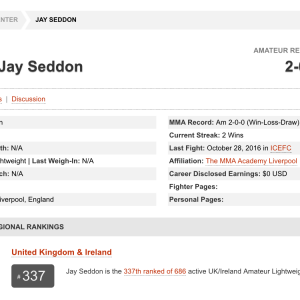 Then my head nearly went during the walk-out, when they got my entrance music wrong.  Although I looked behind to complain and the big screen with my picture listed my age as 28 and height as 5’10” so I’ll have that 🙂  The biggest point where my head could have fell off was that first round, though.  We traded in the centre and I had my nose broken straight away.  Both my contact lenses got knocked out.  I felt my teeth move inside the gumshield (they’re still numb now, might be a trip to the dentist on the cards.) 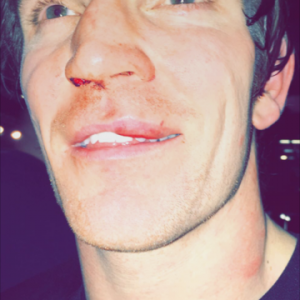 My caved-in nose after the fight

But after that disastrous first round where I thought I was leaving the cage in the recovery position (I had my bell rung big time – that kid could punch like bad mo’fo!) I drew on a nice combination of experience, a bit of skill I’ve acquired all these years, and some of the best coaching I could ever dream of!  I had the MMA encyclopaedia Jason Tan shouting flawless instructions, Mike Wootten calmed me no end in between rounds, my man Tim Barnett was also in my corner and I landed some momentum-changing body shots after hearing his cheering advice, plus i had Al Sheppo, Kev and Daz make the trip up, who have all brought me on immensely lately on the wrestling aspect during our ‘Sunday Smackdowns’.

I’m not ashamed to say I’ve read some self help books to get me through things like that.  Note to anyone who’s on the fence about these: they work. Trust me, they work!  Warming up my arms and legs felt like lead due to nerves but conversely I also felt good mentally. My shots were hitting Jason’s pads with acceptable power and accuracy.  We grappled a few drills and I (assume) I done everything correctly. I was happy with this as I wasn’t even thinking about it, it just all came from muscle memory and flowed sub-consciously.  That’s how I know I’m now an MMA fighter rather than just a boxer trying his hand in the cage.

After the fight and before I left the venue, I couldn’t find the cut-man to get my wraps taken off with his special scissors, so went home with my hands still heavily bandaged and tightly taped.
I stopped off at the Baris Kebab House on Walton Vale for a victory takeaway.  The lads serving me were asking why I was stood there like I’d been juggling fireballs, had I just returned from the burns unit or was I a boxer? Once again, I corrected them and proudly referred to myself as an MMA fighter. The stigma around the cage is slowly changing.  Thanks to ICE for putting me on their show. They really pushed the boat out with the entrances, at a brilliant venue, and I hope they go from strength to strength.  Props to Adam Hussein and FCPC, a great fighter from a quality stable.
Thanks to my crackin little wife who now works away from home, but cooks all my healthy meals of a weekend before she commutes, and tonight drove up on her own meaning she was actually sober for this one, and thanks to my mum and dad who’ve been so supportive in the build up.

Big love to my mates who came up to watch me. I realise it’s not cheap and weekends are a premium when you’ve got a family. Loads let me down who said they were gonna come so the few that did make the trip really made a difference in my mental state. They’ll never know, but they really did help in that way. Well…they’ll know now if they see this blog. (In fact I’m gonna send it them when Jason publishes it haha.)

But above all thanks to the MMA Academy who are a home from home.  At my old boxing club the Transport I feel like I’m with family when I train there, such is the love!
So besides the awesome training on offer, the biggest compliment I can pay the Academy is that I feel exactly the same when I step through them doors on Great Howard street.
Everyone who’s helped me get ready along the way, you know who you are – Seddo loves ya! 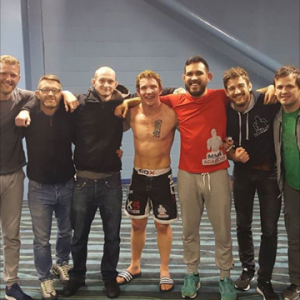 The team after the win

So anyone reading this who fancies doing a bit of training…get on me. Let’s get that 30 day free trial started, look how far I’ve come since I nervously signed up for mine a few years ago.