A Fighter’s mindset, by Tim Barnett

Tim Barnett makes his eagerly awaited pro debut on ICE next weekend (quick interview here) and has penned the following blog on the mindset of being a fighter:-

“For my next blog I want to talk about the power of positive thought. As part of the ever growing, ever successful mma team I’ve noticed massive changes occurring towards the end of last year and carrying on into this year. Sometimes its unnoticeable but when you take a look and reflect you can really see the changes in every single team athlete both physically and mentally.

An important part of our own lives is self-reflection and not enough of us do it. I first discovered this on the gym Christmas night out when some of us lads have had one too many and all start complimenting each other because we don’t usually do that in the gym because we have to be tough mma guys but really since being a child when doesn’t a good compliment help boost you as a person. Anyway, a few of the lads from the gym came up to me and said “your self-belief is so strong” and things like this and in all honesty I was shocked. I couldn’t believe people thought I believed in myself when in my own head each day I was battling the thought of “am I good enough for this” amongst other things! The funny thing about life you see is its completely unique to our own heads. How I see myself I just assume everybody else sees me the same. Something I have always lacked is self-belief, I always beat myself up over things and it’s a bad habit if you want to succeed and one that needs to be let go of. Everything I ever did even every win I had I would think it was lucky, or I looked bad in there too skinny not good enough. But this year and some great books and self-reflection have led me to start believing what other people tell me and use it to power myself. I have worked so hard for this goal. Every step of my life so far every person I’ve ever met has led me to be exactly at this moment right now chasing a professional sporting goal and looking back over it, it can be seen. From my early boxing days and spars, every training session that was tough, every beating I took and continued to go back each week, to mma, to meeting different people and faces from all walks of life that I probably never ever would have usually met, certain people that literally changed my belief with their words, all these things have moulded me as a man not just as a fighter but as a dad, son, partner etc! Martial arts will do this it humbles a person and creates one of the most pure complete versions of yourself that you can become.

I never ever gave myself enough credit. I just thought waking up while others where sleeping on a cold winters day to train was normal. Eating healthy year round was just normal. But it wasn’t! I was working so hard because deep inside me a fire was lit. A fire of success and now that I’ve recognised that I have it and more importantly deserve it I will continue to chase it with every ounce of passion in my body.

So as I was saying the mma team seem to have taken this approach where we all compliment the good things we do and point out the bad things we do in order to improve. No ego’s at all on the mats has led us all to step our game up a level! I cannot wait to see what the year ahead will bring.

A brilliant case study for me (as I do these things) is Chris Green. After suffering a defeat you could see he was visibly lacking confidence and guess where it all stemmed from, himself. Everybody else in the gym could still see that Chris was an absolute beast, his ground skills are solid and his stand up is evolving everyday as is his all round game. What’s really noticeable though recently and after a really good win is his confidence growing. He has literally gone up levels and not because he’s added anything different physically. He’s still always on the mats just as he always was but he’s improved as a fighter just because of a different mind-set! So lets take a look at that! A sportsman has improved his game all round and is performing better because of his mind. So we all push ourselves everyday as hard as we can physically but we never work that mental side of the sport. Well anyone who knows Chris now can see that he is living proof that mind-set and the mental approach to the game works. Remember surrounding yourself with positivity, good people, a no ego approach and confidence will get you very far and if you already have the physical tools watch how much further a little self reflection and look back can get you. If you look back and see you do all you can then fine keep going and reward yourself for it but if you look back and think I could have done more, then you know what to do right?!

When you see life like this it becomes a beautiful thing. When a fight comes around the best way to approach is isn’t I need to win this! Go in and do your very best, prepare your best, eat your best, sleep your best and fight your best and regardless of the result what more can you actually give as a human than your best? That’s right nothing. So give your best and for the right positive people and the ones who matter around you that will always be enough!

Keep training guys, both physically and mentally. Never stop studying the game and see you all on the mats!

And remember: What matters most, is how you see yourself” 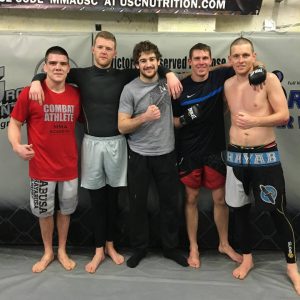