I’m starting this blog from the hospital waiting room.
Originally I had no intention of writing anything when I first came in, but I’ve been here 4 hours now so thought I may aswell do something productive.
Plus if I don’t occupy myself I’ll end up skint and fat again – so far I’ve already spent 4 quid in the vending machine!

You see, this morning I popped a rib in training.
It seemed innocuous at first, just a sharp pain that would pass if I sat the next round out.

Then the spasms started.

So Coach Jason gave me an ice pack and I just cooled off to end the session, still not in any great pain, only if I moved sharply.

Then the adrenaline wore off!

In the changing rooms I couldn’t even dress myself.
Mark Kinsellsa, bless him, had to put my kecks on for me. Now that’s true friendship that!
Driving back to work was a struggle, no right turns and I couldn’t put my seatbelt on. Told my manager I had to go the walk in, who then referred me on to A&E, and here I am, sat in Fazakerley hozzie, devo’d!!!!!

I am matched up to fight on Shinobi War 6 in 11 days time (pending what the doc says when he calls me back in) and prior to today I was feeling amazing.
My weight is down to 74kg, and that’s without doing anything drastic, I’m feeling sharp, focused, learning loads every day in the gym, basically I am/was feeling on top of the world.
This week I’ve just stated juicing, and was up at 5am this morning to do some fasted cardio before getting to work for 7ish and then training with the MMA team at half ten. Dedication!

When I was seen by triage earlier upon first checking in at the hozzie they took my blood pressure and heart rate and asked if I’d took any medication as my resting heart rate was only 40bpm, which is testament to all the hard training I’ve been doing. The engine is back!

Well…the engine was back!
I’ve just been called back in as I’m typing this.
I’ve got torn intercostal muscles.
Been told it’s the same recovery time as a broken rib. I’m looking at 4 – 6 weeks out.
Double devo’d!!!!

We were only chattin this very morning aswell, saying that this is the period where most injuries happen – a week or two out from the fight.
Your bodyweight is right down, your training intensity is ramped up, you’re trying that little bit harder at everything, etc etc.
I’d lost 16kg since September, so I suppose I’ve gotta let this be a lesson, and not balloon up so much when outside of a training camp.

During the same session that I injured my ribs in this morning, I also done damage to my ear.
Get on how black it is on the pic below. 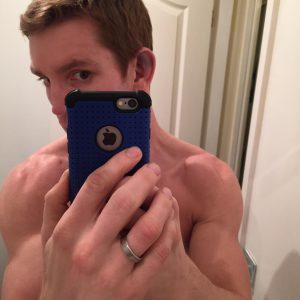 Zoom in if you can

They said they wouldn’t drain it though. So it’s welcome to the cauliflower ear clan for me!
I felt a bit palmed off from the hospital though to be honest.
No X-ray, no scan, not even any painkillers – they told me to buy my own ibuprofen as it would work out cheaper than their prescription. I was just sent packing with this:- 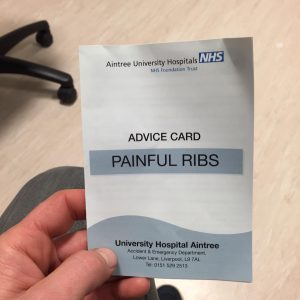 The most patronising leaflet ever!

Then to add insult to injury I get home to a delivery of the final few items I need to finish camp and fight – Dandelion Root and Uva Ursi (which are recommended for the last part of the water cut on the Dolce diet), and my fight shorts that I’d ordered.

Talk about rubbing it in when you’re already feeling down.

Now am home and know am not fighting I’m browsing through Twitter and all I seem to see is people’s status’s just counting down days ‘til their next night out.
It’s the same old people all the time, and I’m thinking “How can you just have that as your life?”
No disrespect meant to anyone reading this (who’s got no other interests besides going out) but it’s just how I feel. Suppose I’m noticing it more because I’m grumpy and deflated, and seeing as I haven’t had a bevy in close to 3 months.
Ah well, that will surely change soon.

I’ll still be getting to the show this weekend, as there are a few of my teammates on.
Originally there was 5 of us but along with myself, poor old Graham Mealand has had his fight called off.
It still leaves Chris Green, Fionn Healy-Magwa, and my man Mark Kinsella representing the famous MMA Academy.

Good old Kinny is involved in a title fight, so will be contesting 5 rounds for the first time.
That shouldn’t be a problem though. He’s a cardio-machine. Looks can be deceiving let me tell you.
I’ve bumped into him a few times by chance at a butchers in Bootle. Kinny with his lean portion of roast chicken. And what was in my bag?
A lovely carton of sui mais and salt n pepper chips. Caught red handed!

My good mate at the Academy – Adam McGahon – made his MMA debut last year. He made a good observation that everyone having their first fight seems to have that 1 person who helps them through camp. Don’t get me wrong, the coaches at the Academy are first class. They genuinely care. They’re friends first and coaches second. But as Macca observed, there’s always a fellow fighter who you go through camp with who’s there to lean on. Someone to answer the millions of questions you have and calm you through it.
His was Mike Wootten.
Mine has been Mark Kinsella.
He’s been an absolute diamond throughout all the build up to my debut. Despite having the biggest fight of his life on his own horizon.,
We’ve trained together, ran together, sparred together, he’s helped me with my diet, even went for cryotherapy together!

I can’t wait to see him lift that welterweight title. Word on the street was that if we both won we were due to turn the Christmas lights on at Bootle Strand!
Anyway, if you’re reading this, try and get down the Olympia, Saturday 28th November to support the lads. It’s the 6th edition of the Shinobi series which means the first 5 have been a roaring success. You can still pay on the door
It’s a brilliant show, which gets bigger and better each time. You won’t regret it.