Well, the MMA debut is fast approaching.  The weight is dropping off me.  Now that I’ve drew a line under the boxing career I feel like I’m progressing a lot quicker during classes.  Instead of worrying about things like how adopting a certain stance would make me pick up bad habits for boxing, I can throw myself into every technique and it’s paying dividends.

I’ve been smashing the morning/lunchtime sessions and also getting in for the evening classes as and when I can.  Loads of Jiu Jitsu has brought my ground game on.  It’s mad but where BJJ is concerned, having that little break over the summer seems to have helped rather than hindered.  It’s like when you can’t think in a test, or when you walk away from a problem and come back fresh with new ideas.  I found when I was hammering the jitz that I was sometimes taking too much in and trying too many things when I got to a good spot, rather than sticking to the fundamentals and perfecting the basics.  Having one or two moves to call on that you’ve got nailed to a tee is far better than rushing through several loose techniques that will never come off.  Don’t get me wrong, my mind still goes blank at crucial moments when I’m sparring, but there’s a bit of muscle-memory building up now so these blackouts don’t happen so often.

There’s a film called Limitless that stars Bradley Cooper or Brad Pitt or some other of those actors that’s the spitting image of me. If you’ve not seen it, the story is basically that we only use 10% of our brain and Bradley or Pitt (or Seddo) stumbles across this pill that opens up the remainder of your mind and you instantly see things outside the box.  It got me thinking – how useful would that pill be when you’re rolling?!!  I might even have a chance at stopping a Peter Youds’ pass if I necked one of those beforehand!

But anyway, there’s deffo been progress for me and I owe a lot of this progress to loads of work I’ve been doing in the daytime 101 classes.  These classes used to be predominantly white belt level but as of late there’s been many blue, purple and browns mixing in. I’ve been pairing up with the likes of Ste McGiverin and Kev Corkhill, who having been demonstrating their own excellent coaching tendencies even though they’re not the designated coach for that session. It’s paid off big time. 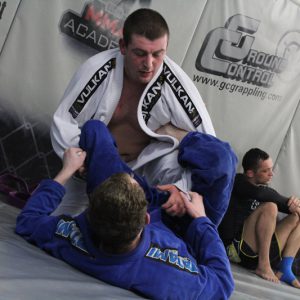 In the last blog I mentioned how the extra weight I’d put on was helping me on the mat. I was able to do my own little version of ‘slow-cooking’ when playing heavy with my top game.  Well…that’s now out the window seeing as I’m under 80kg for the first time in months. Thankfully what I’ve lost in (weight) pressure I’ve made up for in extra agility/athleticism now I’m more fitter. I haven’t been able to get too carried away, though. There’s no bigger ego-check than Jiu Jitsu. One day you feel like you’re dominating everyone (in my case I mean other white belts) and feel invincible. You’re the hammer! The next day you’ll find you’re the nail, and can’t seem to win a single exchange with anyone.

It’s all a learning curve though and it all bodes well for the bigger picture for me of full MMA.  I’ve started the MMA sparring again and it’s like the standard in the gym just gets better and better. There’s new talent emerging all the time, for instance Fionn Healy-Magwa – the young welterweight who I mentioned in my last blog winning via flying knee on the Shinobi War 5 card. Turns out he only went and fought again soon after, once again winning in spectacular fashion at Amateur Cage Battles, taking home the ACB title.  You’ve more than likely seen it but if not have a look here.