Good to be back

No – it’s not the title to the new Hugh Grant film – it’s the heavy few weeks break I had over the Summer.

But I’m back now and ready to pick up where I left off. The only thing stopping me is the fat suit that I feel like I’m wearing under my skin.

I swear, no one puts weight on as quick as me.

First thing that got said to me on my first night back was “Bloody hell Seddo, you left looking like Kev Corkhill and came back looking like Big Mo.” Nice one boys 🙁

The extra weight has actually helped me a bit in the BJJ classes. I’ve been able to use my weight to my advantage when playing top game – Slow cooking people ~a la Antony Jones style.

The MMA classes are a different story, though. I’m struggling even with the warm-up on them. It’s a shame ‘cause if there’s one thing I pride myself on it’s my fitness. My ‘engine’ has always been one of my stronger points, but after a Summer of partying and with all this timber I’m carrying it’s an engine without any petrol.

God knows how long I’ll last when I get back into full sparring again!

I’ve missed the last few Saturday’s sparring but fortunately have been able to make up the time by getting in of a Sunday with a few of the lads for a ‘bonus’ wrestling session. It’s great having the option to train 7 days a week at the Academy.

Then the other Saturday I finally managed to get in but low and behold there was no sparring on, as two of the lads (Tim and Fionn) were wrapping-up camp and had done all their hard work in preparation for the Shinobi show.

I mucked in and offered a helping hand by padding Tim at the end of his workout. I’ll be honest, I’m no coach (not yet anyway) so I was just winging it and improvising on the spot, but I could see why Tim has came on so fast in such a short space of time. He was like a sponge taking in everything I was saying and then putting it into action on the pads. It’s no wonder he’s clicked so well under Jason Tan’s expertise and knowledge.

I also got involved with Fionn’s preps by rolling with him during his dreaded ‘up-downs’.

My word that lad is fit! He just consists of basically lean muscle-mass. Kind of what I look like in my head until I look in the mirror.

Afterwards, we were chatting about the bonuses that the Shinobi organisers offer, which is a great incentive on an amateur show.

Well it transpired that Fionn only went and won one didn’t he? Taking home knockout of the night for this flying knee.

Unfortunately all good things usually come to an end, and Tim Barnett lost his prestigious unbeaten record in a local derby that was top of the bill for the lightweight title.

No disrespect to Jack Flynn, who looks a top quality grappler, but I thought Tim was completely dominating the contest until he made a mistake that Jack capitalised on.

Tim’s at the best place to learn from his mistakes though. Spend a week at the MMA Academy and you can’t help but learn from every coach and team member you train with.

The following day two of the Academy’s Muay Thai coaches were in action on a show in Widnes, and both recorded stoppage victories with brutal kicks. 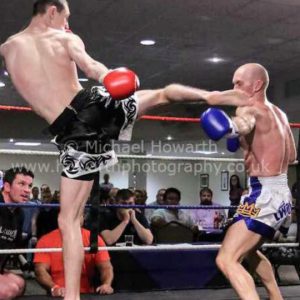 Rob McNee won in the 1st round, as pictured above, before Matty Crozier landed a sweet left body kick to take home his first of many titles to come!

There’s been a few more things happening this week but I’ll leave it there and put them in the next blog. Like I said earlier – my fitness levels aren’t the same anymore and I’m out of breath just typing this with these fat fingers of mine.