The gym has been bouncing lately.
Quite a few MMA Academy members are preparing for upcoming fights.
In the next few weeks we have Muay Thai coaches Matty Crozier, Rob McNee and Chris Dougo (Panda) all preparing for appearances on the ‘Fight Machines’ show.
On the MMA scene we have Aaron Aby on the ‘Ice’ show, Mark Kinsella, Graham Mealand and Tim Barnett all fighting for amateur titles on the biggest amateur card out there – FCC-, along with Ant Davies fighting pro on the same show.
Add to that the never ending roster of competitions for the ‘Jitz’ team thanks to the all-year-round BJJ calendar. Head coach Jason tan is even participating in a 4-man tournament at Grapple Nation (more on that in the next blog, along with some well-deserved Jiu Jitsu belt upgrades for the team.)

So as you can imagine…the atmosphere training amongst these guys has been electric.
There’s people at various stages of their ‘camp’ striving to be the best they can be, and there’s the likes of myself and other team members who are ticking over looking to improve with each session whilst we await some news. It all bodes for a brilliant atmosphere in the gym!

On top of this we’ve had other MMA gyms travel up to mix it up with some sparring.

The usual faces from Reps in Preston have been teaming up and getting in with our guys for some quality classes. The MMA Academy is becoming something of a second home to them these days.

We’ve also had pro-lightweight Stephen Martin travelling all the way up from Derby for some sparring. 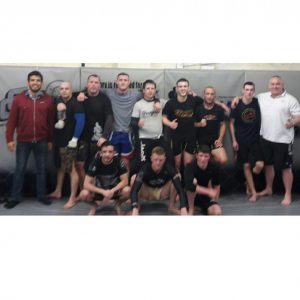 After a great sparring session

I’ve done some rounds with Ste and let me tell you he always ‘brings it’! A great all-rounder and someone I’ll be looking out for in future

But going back to ‘our’ boys…the gym is thriving, the roster of talent that walks through the Academy doors is growing and growing and all the boys are looking sharp as can be.

For instance, last week’s MMA101 evening class (taken by Mike Wootten) consisted of Graham Mealand smoking every person in every drill that Mike set for us.
The following morning I took an early lunch in work (the joys of flexi-time eh!) to get in for the daytime sparring and I couldn’t lay a glove on Tim Barnett.
If you’ve read any of these blogs in the past you will know I am an advocate of Tim’s talents – the boy is destined for the top – but lately he’s added even more strings to his bow.
He’s just got back from a few weeks in Thailand, where he managed to get in a lot of training and pick up some new Muay Thai techniques and he’s added another dimension!
All I’ll say is watch out for them knees next time you see him in action. A beautiful shot! A shot that I was on the end of in sparring – a lead knee flush to the face. Luckily for me it landed direct on my jaw and the gumshield took the full force of the blow. Just an inch higher and I would have had another lovely broken nose, and a furious girlfriend because I was sparring so close to my wedding.
Yep, I’m getting married (Sorry girls! But come on, a hot piece of ass like me doesn’t stay on the shelf for long!)
By the time you read this I’ll be on my stag do, probably chained to Sticky Vicky in a bar in Benidorm.
The break comes at not the best of times, as I’m on weight and more or less at peak fitness after finishing the boxing season on a good performance the other week. So the last thing I wanna do is start from scratch all chubby after the Summer.
Tell you what though, if getting married enhances my game like it has with Mark Kinsella then I’m all for it.
Since Kinny tied the knot he’s seemed to come on leaps and bounds. I don’t know whether it’s more focus in his life now or more desire to succeed, or probably he just needs to get out the house to avoid all his chores but either way he’s smashing the training lately and looks a safe bet to keep his unbeaten record and do the business at this upcoming title fight. 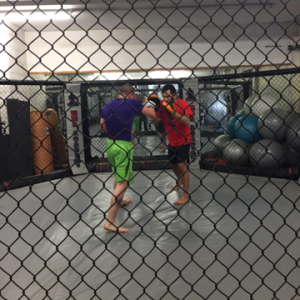 Kinny working hard on his ‘up/downs’ this morning.