Last night saw the return of the FCC show in the Bolton Macron Stadium. I went down to support team mates Mark Kinsella, Aaron Aby and Ste Nightingale. Also SBG had Matt Inman fighting so we went to support him too.

As usual FCC delivered with the fantastic venue, production and all round smooth running of their show! Adam Teh has got it down to a fine art now! What a night it was. Some really fun fights to watch as a spectator. Early on there was a few really good wars which finished late in the 3rd round with a big knockouts!

First up representing the MMA Academy was Mark Kinsella. Over the past year I have seen a change in Kinny where it seems now he’s really starting to realise just how much potential he has in the sport. Kinny struggles to take a compliment around the gym but he deserves a good few here! After competing and winning recently on the fantastic Shinobi show he was riding that confidence coming into this fight and it showed! He has really knuckled down in all aspects of the sport but what we’ve really seen drastically change is his eating habits! He’s got the nutritional side down to a tee now with the help of Mike Wooten! Hes now known as “skinny Kinny” and he suits the nickname! Anyway, just watching him walk out he looked the part. A really cool approach to fighting he seemed very relaxed and composed. From the first bell he was getting the better of the striking exchanges actually landing the majority of his shots on the back foot using an effective counter striking approach! The fight played out with both lads clinching and working from there but Kinny proved to be stronger in this area and landed some lovely ground and pound on his opponent from the guard! He turned the ground and pound up in the second and was constantly looking to pass but hats off to his opponent he had a real tricky guard to pass! The third was similar with Kinny on top and the fight went to a unanimous decision with Kinny clearly winning all 3 rounds! It was a real mature performance from him and the win sees him earn the number one contenders spot against Chris Senior who also fought and won on the night! An all-round impressive display from Kinny one which he should be very proud of! I look forward to watching him take the title in June! 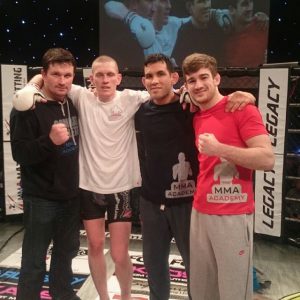 Next up we had Aaron Aby. This lad inspires me every day we train! He is a real positive influence to all of us around the gym and is always helping give us advice! I was really excited for Aby for this fight I had text him previously saying “I think this is the fight where you will really show what you can do”! and boy did he!! From the early bell Aby got a beautifully timed takedown and that was the end of his opponent from there! I’ve felt personally just how strong and heavy Aby can be on top dropping bombs and that’s exactly what he did to his opponent! Some of the most brutal ground and pound I’ve seen since Jon Jones destroyed Matt Hamill; Aby landed hellbow after hellbow on his opponents head and cheekbones! Personally I would say it could have been stopped much earlier but his opponent was tough and kept moving but Aby really was relentless! I sat near his Dad and noticed just how proud he was watching his son earn the victory it was a great performance. For me this was one of the best performances I have seen Aby give it was so professional and he looked levels above his opponent! One he should be really proud of I took a lot from the fight in terms of how to maintain good posture and position!

Ste Nightingale had his work cut out! When his opponent walked out I like most of the audience judged a book by its cover! He looked painfully thin and I though Ste would walk through him but he was the kind of Bruce Lee thin really ripped and strong! He had some really impressive striking too and caught Ste early but he weathered the early storm and used his dominant wrestling to get his opponent to the mat and secure the armbar. Another really good performance against a real tricky opposition!

Finally Matt Inman fought the training partner of Ste’s opponent! He was tough and very strong landing some nice leg kicks early. Matt was using his height and range to walk his opponent down but his opponent was strong and had some nice takedowns! On the ground with Matt is not fun and he proved it in this fight with a beautiful triangle which he set up so well!

All in all it was a great night with all 4 of the people I went to support doing the business in an impressive way! I always look forward to FCC and this one delivered again! Well done to all the lads who fought you all delivered top performances!

See you all on the mats!