This past Saturday saw the annual English No Gi Brazilian Jiu Jitsu Championships take place, down at Dartford in Kent, where the MMA Academy rolled up and did what they do best…medal!

The event is officially ran by the UKBJJ Association and competitors can rack up points to gain entry to larger events such as the European and World Championships. The Academy therefore sent a strong team to compete at varying levels of experience. 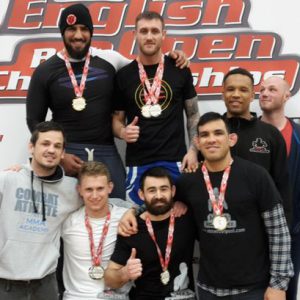 From a team of eight, we returned with four gold medals, two silvers, and a bronze.
It’s becoming the ‘norm’ to regularly see these photos of my gym mates with medals draped around their necks, which is testament to the elite coaching and top level training that goes on down the Academy.
It’s good to see fellow white belts like myself excel through the ranks, as you can see from the photo above with Big Mo sporting double medals around his hulking neck!
What impressed me most though was the coaches’ haul. Coach Peter Youds was flawless in winning the Lightweight Pruple Belt division. Literally, flawless! The Faixa Rua sponsored athlete took gold without having a point scored against him. After a successful ‘MakeAChamp’ fundraising campaign Youds will be off to Rome next month to do his thing in the Euros.
Even more eye catching (for me) was the performance of the other coaches…Jason Tan and James Owen. These two throwbacks returned to action after long periods on the shelf to cover themselves in glory, bringing home winners medals in the Black Belt division.
Jason shook off the cobwebbs and injuries to claim victory in the Medium-Heavyweight division.
After a close match there is a rematch on the cards, set for May 2nd.
Coach James Owen was brilliant in winning the Lightweight Black Belt division, a feat even more impressive when you take into account he’s a Brown Belt! You can see a clip of of one of his expert armbars here.