First blog for a week or two as I’ve been out the gym recently – succumbing to the dreaded ‘man-flu’.
Calling it man-flu sort of makes light of the situation…for a few days there I was convinced I had Ebola!
Nah, to be honest I felt quite ok to train at first, but I didn’t wanna spread any germs round the mat, especially with so much going on at the Academy lately. I’m nice like that.

I had my first session back this week, where I spent a full hour of the MMA101 class tech-sparring with Anthony Trimm.
Trimm is a great training partner. He picks things up dead quick and adapts really well. I always get a lot out of our rolls/spars, without either of us giving it 100%. I was destroyed after about 20 mins on Thursday, though. It’s scary how quick your fitness can leave you.
Luckily for me, Trimm wasn’t in much better nick than I was and we struggled through the class together like two little Christmas turkeys.

So anyway, there’s been LOADS going on. It’s been an eventful end to the year, with members moving onwards and upwards both inside and outside the Academy’s doors.

Inside the gym’s four walls we’ve seen progress in both the Brazilian Jiu Jitsu and the Muay Thai classes.
First up, on the BJJ front there was a very high level and very intense iron man that seen Rich Dean and Graham Mealand move from Blue Belt to Purple Belt, and Christine McDonagh and Stephen McGiverin take the big step from Purple to Brown.
As always – all members are thoroughly deserving of their new belt status. 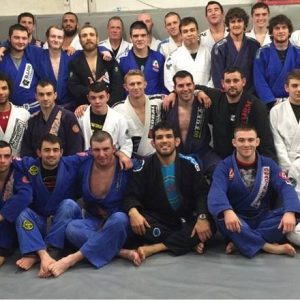 Rich Dean is one of the nicest guys you can meet at the gym. He helps out with a lot of coaching, which has brought his own game on leaps and bounds over the past year. He’s also the owner of one of the best D’Arce chokes you’ll see – trust me, I’ve experienced it (Lots!)

It was only a matter of time before Mealand moved up.
Predominantly an MMA fighter…Graham also loves to compete in BJJ tournaments, where he’s been smoking blue belts for fun lately. And more often than not he gives a good bit of weight away!

What can I say about Ste Mcgiverin that I haven’t already! If you’ve read my last couple of blogs you’ll know what I mean. Whenever I train with this machine I pick up loads, although it sure can be painful along the way! Destined for his black belt is this man.

Christine has been at the MMA Academy around a year and has been a breath of fresh air while she’s been here. Her knowledge and experience has really rubbed off on the numerous other female members, but she’s been a valuable member of the team for the lads aswell. It’s unfortunate that Chris has had to leave us, but the door is always open for her to come back.

Similarly, another member who has had to leave us, and also another member who has left with a bang is my very good Finnish friend Oli.
I’ve mentioned Oli in these blogs before. He’s been a great sparring/training partner over the past few months. Tough as nails.
He leaves the Academy’s doors with his Muay Thai blue armband, after being shark-tanked this week. 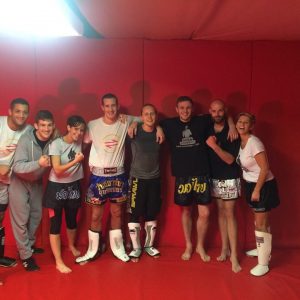 Oli and Christine will be back one day, I’m confident of that.
The MMA Academy definitely leaves it’s mark on ya!
I remember not long after I joined there was an iron man where Ste Rainey gained his blue belt, just before leaving these shores. Ste is still very much in touch with the gym. It’s just the way it is here!

Pretty soon we’ll be losing yet another member, when Paulie Brown emigrates to Australia.
Paulie’s a great lad. I remember when I first got to know him.
Unbeknown to the pair of us, we both had mutual friends outside of training, as we move in similar circles. We were paired up at a seminar that was taken by the highly regarded BJJ World Champ Yuri Simoes (the MMA Academy has superb contacts and is great for these type of things.) We were then drilling together the following day, both as white belts (I still am!) where we were learning the Omoplata.
For those of you who are unfamiliar with jitz I’ll try an quickly explain what an omoplata is.
Now I’m no expert, so this could be wrong, but the way I see it…if you are on your back and your opponent is posted up above you and you go for either a triangle or an armbar…well if you don’t/can’t hit it then you can swing your legs around up and over their shoulder and hit an omoplata, which is commonly used as a sweep but can also be an effective submission.
To submit you simply sit up, where you’ll be at such an angle that you put sufficient torque on your opponents shoulder making them tap.
I’ve just read that back and it sounded like “blah blah blah” but sorry, that’s the best this white belt can explain it.

Anyway…we’re drilling this and Coach Jason says to sit up very slowly whilst we’re learning the technique, as any sudden movements can easily inure your training partner.
Well good old Paulie springs bolt upright like The Undertaker used to in WWF when Paul Bearer would show him the urn! 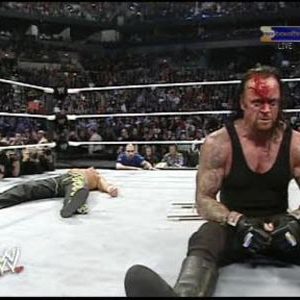 Imagine Paulie is the guy on the left – in less than a second he’s in the position on the right.
Let’s just say Paul is a lot less rough round the edges now he’s a blue belt!

Anyway, that rounds up what’s been going on inside the gym recently.
Outside the gym it’s also been hectic.
There’s been the usual success at the Jiu Jitsu tournaments up and down the country, and the MMA win streak continued for Mike Wootten and Tim Barnett.

As is now expected, the MMA Academy’s strong jiu jitsu team continued with more medal hauls, most notable was their local showing at the Liverpool Open. The highlight for me here was my good old mate Peter Barton competing for the first time. Peter has just overcome cancer, so this was definitely a success story with a happy ending. Well done Farmer Pete!

Sticking with Jiu Jitsu it was good to see members of the Kids Explorers group get out there for some training at the UK Elite BJJ session and also attend the Southern England Kids BJJ League.
The youngsters at the Academy are the stars of the future, I always say it but I wish I would have got involved in Martial Arts at that age. 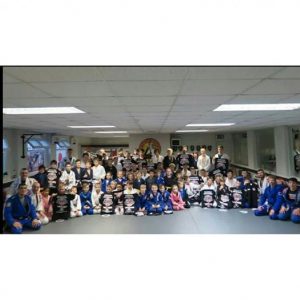 Moving on to MMA news and we had Mike Wootten doing his thing on the Big BAMMA Manchester show at the start of December.
I was lucky to be cageside for this, and enjoyed every minute of it. My voice is still a bit hoarse now from all the shouting.
Mike moved his record to 9-0, but his opponent was no pushover, sporting an unbeaten record of his own.
Ligier was dangerous throughout, especially in the 1st round, but Mike was always levels above and moved away comfortably for a unanimous decision.
The following week Tim Barnett finished the year 5 and 0 with 5 first round finishes, as he won on the amateur MMA show at Bowlers, also in Manchester.
I was almost matched up on this.
Coach Jason had a couple of names for me at 77kg a few weeks before, but I’m only 74kg when fully fit. He tried to get me a catch-weight (as the weight below is 70kg, which would be a bit too far bearing in mind it was a ‘same day’ weigh-in.)
He said though that the problem with catch-weight matches is that if your opponent pulls out injured the week of the fight (common in MMA, due to the physical nature of the sport) then you will really struggle to find a catch-weight replacement.
He actually had me a match the Monday before, at a nice weight of 75, but by then I was bedridden with the flu. Ahh well, there’s always next year, and I’m glad Tim represented the Academy with another superb performance.

On the subject of Tim, I’ll mention a little secret here and see if he gets onto it.
It’s the gym’s Christmas night out on Saturday (I think it’s a 9pm meet-up at Aloha in town) and myself, Tim and Adam McGahon are going for something to eat first (-Team Ginger!)
Me and Macca are winding Tim up saying we should have a ‘Christmas Jumper’ night out. He’s took the bait. 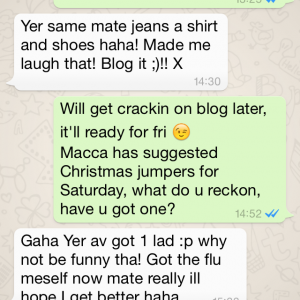 Hook, line and sinker!
Mac made me laugh when I forwarded him this text, to quote him “Tim’s a nice lad but hard as nails aswell, 5 first round finishes, we don’t wanna end up being 6 and 7.”
Hahaha I think I’ll leave it at this and see what happens. If he sees this blog then fair enough.
But if you turn up Saturday and Tim’s in a wooly Rudolph jumper then you’ll know he hasn’t read the blog!

And if you’re not out Saturday then have a happy Christmas, from me and everyone else down at the gym x