An eventful week finishes down at the MMA Academy, with lots going on for both me personally and the numerous students who walk through the door.  The main highlight has to be the team’s performance at Grapple Nation 3 – a prestigious BJJ competition that is becoming more and more talked about with each event it puts on.
We took a team of just 12 competitors, and returned with 4 gold, 4 silver, and 3 bronze medals – 11 medals in total meaning we topped the medal table. Outstanding! 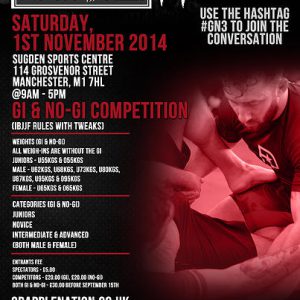 Brazilian Jiu Jitsu continues to gain popularity on Merseyside, so if you’re not already involved in it in some way, if you’re reading this and you’re interested in taking the plunge, why not come down to the gym for your 30 day free trial?

My personal highlights this week were progressive, I had 3 bits of good news that got better and better.  First up, I found that I could start kicking again. I ‘doubled up’ the shin guards on my right leg in the Muay Thai classes and managed to soldier through without needing an ice pack later on.  Next up, I attended my first ever BJJ competition class.  And finally, I found out I could make my MMA debut before the end of the year.

Let’s start with the leg. Since I began training again after the injury, I was happy to say that I was looked after during any sessions I took part in. Coaches like Mike Wootten and Ryan Hillier very kindly adapted parts of their class to be more boxing specific, especially with anyone who was drilling/sparring with me.  Towards the end of the week though I thought it was finally time to start kicking and checking again. The leg survived. I won’t lie, it’s not 100% , but it never fell off, and that’s the main thing!

It was Halloween this week and Mark Kinny turned up with one of the best masks I’ve ever seen. One with prosthetic features that were so ugly, it looked dead realistic. I asked him where he got it from but he shot me a puzzled look. Turned out it was his real face. – *Awkward*  I’m only kidding of course but it was good to have Kinny back in the MMA classes taking time out to get married. Surprisingly, he’s looking in even better shape now than he did before he went away. Hope that’s the same case for me when I get married!

I was talking to Tim Barnett after the session and he said he was gonna enter his first BJJ competition next month.  Tim is one of the most promising up-and-coming MMA fighters out there, and when talking to him he had the attitude of “Why not?” regarding competing in a jits tournament. He might not have drilled BJJ as much as he’d have liked lately, but if anything it will help his MMA training by getting out there and competing.  He said to me “You should do one aswell lad.”  Put on the spot, I muttered something like “Yeah I know, I think I will” (can’t even remember exactly what I said) but head coach Jason Tan was in the room and jumped in saying that I should therefore get in the BJJ competition class.  And before you know it, I’ve agreed to have a bash at a jiu jitsu event in the next few weeks!

So a few days after Halloween it was my first BJJ comp class and I was expecting fireworks…as the class took place on 5th November (I’ll get my coat.)

Either Jason or Jess on reception provided us with a nice touch by dishing out toffee apples on the desk as we walked in. There was a white chocolate, milk chocolate, and caramel covered selection to choose from.  Ste Mcgiverin struggles when faced with choice, so he walloped one of each – literally 2 mins before stepping onto the mat.  The class was tough as nails but I loved every minute of it. I got loads from it.  Obviously, a big part of that was due to the level of training partner in the room.  But also the style of the class and the competitiveness of the training. Stuff like that brings your game on leaps and bounds.

The class ended with winner stays on sparring that was first to score three points. There was 6 on and 2 off (3 pairs in the middle sparring, and 2 in the queue waiting.)
You must have heard that BJJ phrase ‘Sometimes you’re the hammer and sometimes you’re the nail’?  Well just call me Jimmy Nail as I was constantly in the queue, being defeated almost instantly once I got on the mat.  A pattern quickly emerged, as the three men in the middle were always the same 3 faces – Jason, Peter Youds, and Ste Mcgiverin.

I started watching these closely, looking for tips to help me stay on longer. I was thinking to myself “WWJD?” (What-Would-Jason-Do?) Haha and you know what, it actually worked.
Keeping a close eye on the head coach I picked up a few sneaky sweeps that I hadn’t thought of trying (your mind often goes blank when sparring jiu jitsu. Well, mine does anyway. Keeping a clear head and remembering your technique is key in winning.)

Near the very end I got on versus Ste, and the purple belt powerhouse was surely exhausted seeing as he’d been on consecutively for about 10 spars.  I took advantage of this, and swept him and then passed to pick up my first win of the session. Yaaayy!  Maybe it was only because the sugar-rush from all the toffee apples had worn off, but either way it was confidence building to try something new and see it pay off.

After the class Chris Goryl stated he was taking a yoga session with anyone who fancied it.  I had other commitments so couldn’t stay, but I noticed the lads’ faces light up when it was time for a well-earned stretch off.  Chris told me he’s even just started to get paid for teaching the odd class, so we now have a bona fide yoga instructor amongst us, which will only benefit everyone in the long run.

The week finished off with some tough MMA sparring on Saturday.  I got a good few rounds in with Olli, Adam McGahon, Tim Barnett, and Mike Wootten.  I never feel like I’ve done enough after a spar. I’m always full of “I shoulda done this” or “I shoulda done that” kind of thoughts and go over mistakes I made rather than focus on the good things.

Saturday mustn’t have went too bad though because head coach Jason put a date to me that I could potentially have my first MMA contest on.  I was happy, but nervous at the same time. There’s nothing like hearing a fight’s been made to stoke a fire in your belly. That exciting feeling, but mixed with butterflies. You feel alive baby, YOU FEEL ALIVE!  I go home all happy. Happy that all the hard training I’ve been doing is going to show, going to pay off with an end result. But then the doubts creep in again.

Am I good enough?

Well Jason and the other coaches wouldn’t put me in if I weren’t good enough.  And the lads I’d just sparred had a combined record of 14-0 (at a good standard as well) so I must be ready, or at least on the right path.

The only thing is…if I am to compete in MMA then I wanna gear all my training towards that, so I might have to put the jits competition on the backburner until early next year. Unless I can move some things around and continue getting in for the BJJ comp class as well as the pro team morning sessions. Here’s hoping. But MMA has to take precedence if not.  Either way it’s exciting times. Exciting, but I wish these massive butterflies would give it a rest!