A few highs and lows this week.
Highs – some solid training, learning and improving more and more.
Lows – ended the week with a visit to the hospital with an injured leg.
But we pick ourselves up and go again…it’s part and parcel of any combat sport, and I’m just itching to be healed and get back in the gym.

I started the week with a great Monday morning session on the pro team. These classes are a brilliant mix of every discipline you need to compete in the cage. I often struggle here, but I also pick up loads. I struggle simply because the calibre of training partner jumps right up. And that’s no disrespect to anyone who attends the 101 class (bags of potential in there!), but these pro-team crew really bring their ‘A-game’.

We worked on some takedowns; how to still finish one when you’d been sprawled on, and ended the class with some conditional sparring. A mixture of wrestling, BJJ, and boxing – rolling with strikes. It was tough, and to quote Loz: “This is probably the most important type of sparring for MMA.” I can see what he means!

I always find the wrestling aspect a lot tougher in these classes anyway, which in part is down to the higher skill level of opponents, but also down to the ‘attached striking’ condition. We wear actual MMA sparmaster gloves so naturally we are only going ‘light’ with the strikes, and also only striking from clinch situations. Of a Saturday it’s full on striking, which is where I can get my takedowns off easier due to forcing mistakes and setting things up with some well-placed shots.

When it’s pure wrestling I find myself on the losing end more often than not, but as long as I keep learning and taking at least one or two things from each class then I’m a happy man.

I mentioned last week how Ste McGivern had been helping me out a lot in BJJ with tips here ‘n there. Well this continued in the MMA 101 classes. Ste and another BJJ purple belt – Peter Youds – have been attending the MMA sessions when they can. I’ll tell you now…they completely OWN the classes when they get in. Any ‘winner stays on’ sparring drills at the end will always result in these two rooted to the spot winning spar after spar. It hammers home the importance of Jiu Jitsu in MMA.

I also mentioned last week how good it was to be part of the MMA Academy and the benefits of training with all kinds of people with different work connections. There’s someone for everything, from a quality butcher who can give you a juicy steak to chew on, to a talented dentist/orthodontist who can provide a dazzling set of gnashers to chew it with.

Well, coincidently, this continued the day after I posted the blog. I was in the EE store looking to switch my broadband over fromSky. When it came to sorting monthly payment details, I pulled a few of my cards out of my pocket without looking (as you do), and my MMA Academy swipecard fell onto the counter. The manager who I was dealing with caught sight of this and said “I’m going to do you a good deal”. He said he’d noticed the MMA Academy logo and his cousin Cunny trains there, so he moved me over to a Friends and Family deal where I got twice as fast broadband for half the price. So if you’re reading this…thanks Cunny!

Like I said last week, being a member of the academy pays for itself! Just one accidental slip of the hand reveals the logo and I’m in! OK I’ll admit…I try this trick absolutely everywhere, either in hope that I’ll get a discount/deal or at least the pretty sales assistant thinks I’m some top cagefighter.
Haha I’m just joking. (Or am I???)

The week ended for me with the Friday morning fighters class in Muay Thai.

Everything was going well, I was feeling sharp as ever, but right at the end disaster struck.

I threw a right body kick at Ryan Hillier, who expertly ‘checked’ it (blocked it with his own shin) and I just hit the floor like a sack of spuds, convinced it was broken.
Thankfully…it wasn’t. The doctor in the hospital said it was the muscle that runs between the two bones in the shin (tibia and fibula) was bruised/bleeding and the constant pain was from the pressure of all the swelling.

I’m loaded up on strong painkillers as I type this and to be honest I feel great! I feel like getting back in the gym tomorrow morning, but then I look down and see my right leg is twice the size of my left and think better not!

Like I said, it’s a shame because I was feeling sharp as a razor before this, and don’t want to be set back too long.

I was disappointed that I missed Saturday sparring for this reason, and also because it was some of the lads’ last spars before appearing on the FCC (Full Contact Contender) show on October 18th.
We have Robbie Fallon, Aaron Aby, Tim Barnett and Graham Mealand all competing in Bolton at the weekend. It goes without saying that they are all looking tip top. I have been doing a good few rounds with Mealand lately, as he is up against someone with a strong boxing background.

Graham’s always been a solid grappler, and can throw powerful kicks that can KO people at any weight class. His boxing was always decent aswell, but in the lead up to this fight his hands have improved tenfold! He’s been doing extra some work outside of the Academy with a local boxing club and I can personally vouch for the improvements in his boxing week after week. He gets harder and harder to hit, and lands shot after shot with more ease. This is going to be one hell of a fight! 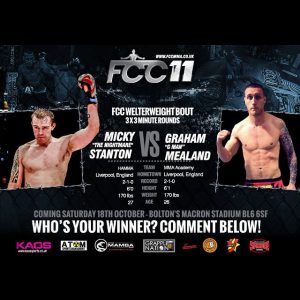 Hopefully I’ll be back in the gym this coming week to rub shoulders with the lads during their final preperations. I certainly won’t be doing any Thai for a while though!
Nah, to be honest you have to face your fears, and I’ve been told that I’ll be fine as long as I double up with my shinguard on that right leg for my first few spars.

I’ve also discovered why Ryan’s shin felt like a concrete block when my glass shin collided with it. It’s because I never committed to the kick (something I never seem to do!) When you really throw a solid kick, your foot is pointing down and your whole leg is tensed – your muscles/bone/sinew all become solid just on the point of contact.
When you throw a kick half-heartedly like I did then you are leaving yourself prone to injury.
So there we have it. I’m even learning in this game during injury!

I need to have more confidence in my kicks. Really throw them with intention. The longer I’m out the more it will do my head in, I need to return to the gym ASAP or it will not only make me unfit it could also affect my kicking confidence. It’s so frustrating being injured.

But like Arnold Schawrzenegger famously said in that movie…”I’m a cop you idiot!” haha I mean “I’ll be back!”