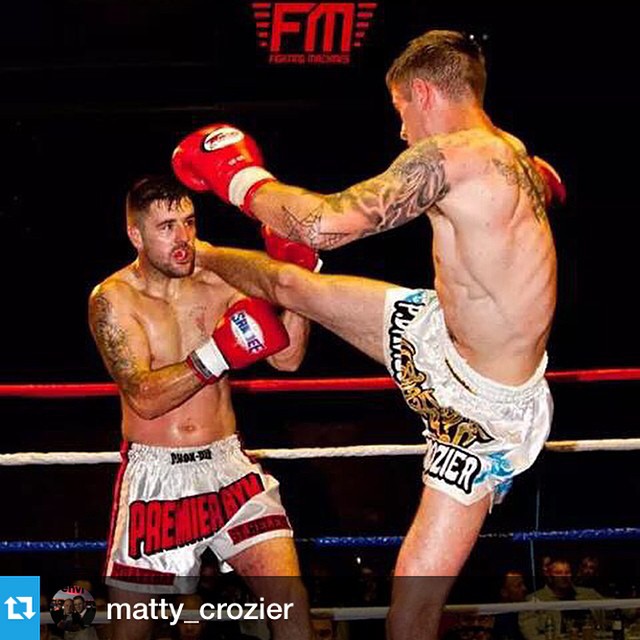 Another quality week of training in the bank, another week closer to becoming the next Chuck Norris!

As I mentioned in last week’s blog, my Thai training keeps on developing bit by bit under the watchful eye of coach Ryan Hillier. My leg kicks aren’t getting much higher, but I’m not concerned about that anyway…I’m more focussed on developing my defence and ‘checking’ of any kicks coming at me. I know I’ll never be a Matty Crozier (another of the Academy’s Muay Thai coaches, who could kick a hole in the top of a 10ft brick wall) – especially not with my little Shetland pony legs. But you’ve got to play to your strengths, and I’m enjoying adding leg kicks to my striking repertoire.

Speaking of coach Matty, I went to watch him fight the other week and he was VERY impressive. He moved to 3 and 0 with a comprehensive win over a very tough opponent who had an MMA background (which showed in his stance and how durable he was in absorbing the power kicks that Matty was firing off!) 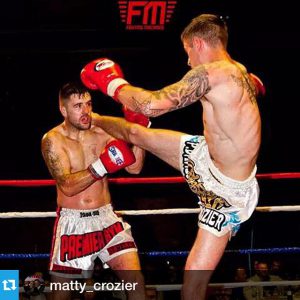 Matty landing one of those HEAVY head kicks

I’ll tell you what I was really impressed with whole Muay Thai show. It was well organised, smoothly ran, gave the fighters great exposure with all the razamatazz entrances, and even the atmosphere in the crowd was pleasant from start to finish. I’ve been in some moody boxing shows in the past but this was the polar opposite.
It was the first Thai event I’d been to but it won’t be the last.

Jiu Jitsu-wise, this week I’ve spent most of my mat-time paired up with Ste McGivern.
Ste is a solid, solid purple belt who’s built like an armoured tank. To illustrate the level his BJJ is at, he recently flew across the Atlantic to the East Coast of America to take part in the worlds. You don’t do things like that if you’re nothing special!

As me and Ste were drilling he was constantly giving me little tips here and there, which resulted in me going on one of those ‘win streaks’ again during the ‘winner stays on’ sparring at the end of class.

Naturally…the longer you stay on, the more exhausted you get, and the more technique becomes crucial if you want to keep your place as the winner.
By the end of the class I was absolutely spent.

So it was a nice surprise to get to do a bit of yoga with Chris Goryl after we’d finished. Chris is an aspiring yoga instructor, whilst also being a BJJ blue belt, and he ran through some ‘Jitz’ related poses with a couple of us at the end. It sorted me right out! And also hammered home the benefits of attending such a bustling gym that the MMA Academy is. Where else would you get free yoga? Ha! It’s becoming the ‘in’ thing around the city at the moment, and it doesn’t come cheap!

As I was saying, the atmosphere that’s created around the MMA Academy with the class gym members and the variety of the students who attend means that just being part of the team comes with its benefits.

If it’s not free yoga then it’s help or advice on tap in many other walks of life.
Need a plumber? Someone in the gym will help you with that. Need some PT or some medical advice? Look no further. Need a new tyre for your car? Come see big Panda and he’ll sort you out. The list is endless. It’s a really friendly gym where people look out for each other.

My favourite benefit from associating with these top fellas, though…is none other than…FOOD!

It doesn’t help when you’ve got to make weight, but it’s nice to have people with food connections in the gym. For instance, this Summer the Academy organised a big barbeque – free for all its members and friends/family. The scran was kindly provided by quality butcher Joe Granby

I love the way the coaches at the gym constantly organise social occasions outside of training time.

There’s no need for them to do it; we all get on brilliantly anyway, but it’s a nice touch and brings everyone closer together. The barbeque was a perfect example of this, as I got chatting to a lot of people who I don’t normally cross paths with due to attending different classes.

I’d like to say I was dignified in what I ate, but I’d be lying. I devoured that meat like Henry VIII, sauce dripping from my fingers and smeared all round my mouth! Mmmm I’m drooling now just thinking back to it. 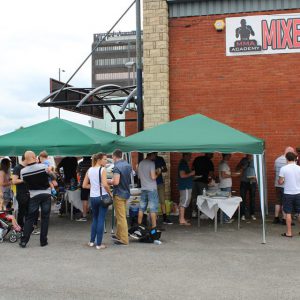 The last few remain, still hungry at the end of a 5hr BBQ!

Another food/gym- related occasion happened the very next week, when I was out with family at one of the city’s all you can eat steakhouses.

Another of the gym’s BJJ blue belts –Enrico de Mello- was working behind the bar …and very kindly sent over complimentary Brazilian cocktails for everyone. Naturally, I declined mine (being the athlete that I am) but had no problems with the mass amounts of protein Rico and his workmates were spoonfeeding me! I was content with my stacked plates of beef/pork/chicken while my girlfriend and her mum ‘n sisters all swooned over handsome Rico ploughing them with free cocktails haha!

This was on a Friday night, so to say I was sluggish for Saturday morning sparring would be an understatement!

I didn’t learn my lesson though, as I done the very same thing this week – filled my boots with too much food on Friday night before regretting and suffering in sparring on Sat morning.
The Friday night food was consumed at Mark Kinsella’s wedding…and I’d like to just take this moment to congratulate Kinny and his new wife Sinead on their nuptials.

Again, I was a fiend at the buffet, going back up again and again. But to be fair it was a lovely spread he’d put on, and I did throw a fiver in his card so I had to eat my money’s worth J

Despite feeling sluggish at sparring I didn’t do too bad

I’ve picked up loads lately from coach Mike Wootten’s 101 class and added them to the vital things I’ve took from head coach Jason when I can get in on the Pro-team classes.
Being more relaxed is something that seems to work, and I’m starting to find my range and think tactics more and setting a pace that’s right for me…rather than just rushing everything nervously.
I’m still a long, long way off where I want/need to be, but it was nice to hold my own against some of the quality operators on the mat.

It was the full stop on the end of a really tough week of training. Well, it wasn’t the very last part of my week. That was reserved for the nicest shower I’ve had in years (the gym has just had a new shower installed, all tiled, sliding doors, the lot!) After giving it 100% in sparring it’s weird how the little things in life can bring a smile to your face. I felt like a diva being pampered living a life of luxury in that shower…I’m already looking forward to jumping back in it after training on Monday!