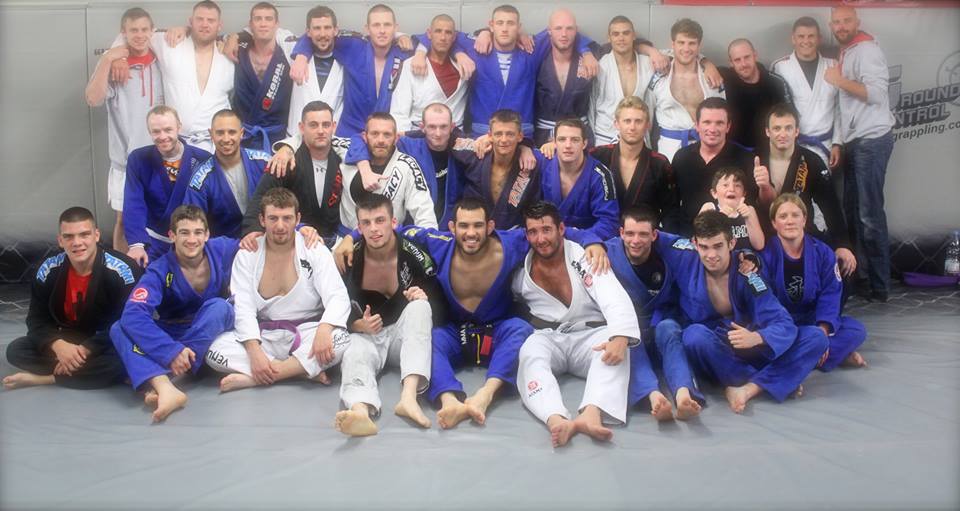 For this week’s blog I am going to focus on the Brazilian Jiu Jitsu ‘Iron Man’ that took place during Thursday night’s BJJ Combat 201 class here in liverpool.
I’ve covered the subject of “Iron Mans” in this blog before, but for anyone that doesn’t know…it’s a ritual that we use to mark the upgrading of a members belt rank.
The internationally renowned ranks in BJJ are as follows:-

Obviously each establishment that instructs Brazilian Jiu Jitsu can incorporate their own structure in between the belts (like a stripe system), but these colours are the basic blocks that we all adhere to.

This week we seen no less than four MMA Academy Liverpool members who were deemed ready to make the step up…so Thursday night seen a Quadruple Iron Man (the first time I’ve seen that many take place simultaneously!)

So here’s how it happens…
The class lines up in belt order, and the person upgrading to his/her new belt is called into the middle to take on everyone in the room, rolling to submission, in a shark-tank format.
There’s just one twist…the person being Iron-Man’ed is kept in the dark until their name is called out.  It’s a complete surprise to them!

First up we had long-time Academy member (and I mean LONG time) Antony Jones, who was making the step up from Purple belt to Brown belt.
I’m not sure whether Jonesy actually knew of the impending Iron Man, but the wry smile on his face suggested that he at least half suspected something was happening (by the fact the ‘201 class had 3 times as many students in than it normally did!)
Jason gave a little speech before we got underway about how valuable Jonesy is to the gym, how knowledgeable and helpful he is, and how he selflessly goes out of his way to make new students feel welcome at the gym (something I can personally vouch for!)
After that we were underway, and Ant began working his way through the White belts…onto Blues…onto Purples, Browns…before finishing with Head coach and the MMA Academy’s BJJ Black belt, Jason Tan.
Coach Jason actually does this cool technique where he takes the students new belt (which he had hidden in his gi all along) and wraps it around their waist whilst they’re rolling on the mat (unbeknown to the student, who’s probably just concentrating on survival by that point!)

Just as Ant Jones was about 4 or 5 men into his Iron Man, Coach Jason called Josh Palombella to the floor, who embarked on his own Iron Man that would see him move from Blue to Purple belt.
Now this one was definitely a full-on surprise!  I was watching Josh’s face for signs of him knowing, and it’s safe to say he didn’t have a clue.
Josh is awesome at Jiu Jitsu.  Myself and his paths don’t usually cross, due to us always sticking to different training schedules, but whenever I see him roll I’m impressed.  I wrote in an earlier blog that he was the ‘King of Guillotines’ – a choke that he’s made his own.  Well when it was my turn to step into the middle with Josh he finished me with…yep, you guessed, a guillotine.

If you class Josh’s Iron Man as coming as a surprise to him then the next two lads up you’d class as a complete shock.  Jason hid these ones well, let me tell you!
We’d already been rolling a good half an hour so we thought that was that but then two White belts were plucked out the room to go through their own rituals.  Us White belts were “in on it” that Jonesy/Josh had their Iron Man that night, but it was completely hush-hush that there’d also be White-to-Blue gradings.
The students in question were Ryan Matthews and Liam Donoghue, and both are fully deserving of their nice new Blue belts! 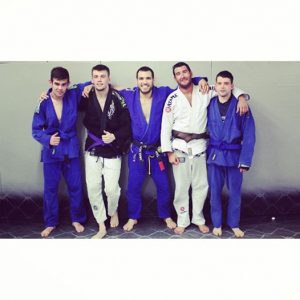 Coach Jason hammers home the fact that at this point – the students are already at the level to duly wear their new belts, and the Iron Man is a ‘Rite of Passage’ that sort of symbolises (and celebrates) them moving on to the next BJJ stage.  Under no circumstances should you come on for your turn and try to prove a point against the student in question.  Not that you’d find that anyway, such is the whole atmosphere down at the MMA Academy Liverpool, but you can see where Jason is coming from.  No liberties are to be taken, but to be honest I’m yet to see that happen once down this great gym, such is the whole “Egos left at the door” policy everyone adopts.

One thing I’ve found is that when White Belts move up to Blue, it’s like they also sub-consciously move up a level.  Like I said, the coaching team down at the Academy see you fit to be at that level, and they know best, but I’m speaking from experience that a lot of White belts I’ve rolled with have attained their Blue belt and it’s like their game is always switched on to that new level.  They just sub-consciously perform consistently, whereas the previous week or month you might catch them in something you’d just have no chance of executing on them now.  Does that make sense?  (I just read it back and it didn’t to me ha-ha – but if you roll then you’ll know what I mean!)
Anyway, I’m looking forward to sparring with Liam and Ryan and seeing/feeling them grow into their Blue belt level (consciously or sub-consciously!)

One point that I wanna make about this week’s Iron Man, and something that makes it all the more impressive, is that Big Mo was in the class.  And being that Mo is just a white belt, it meant that they all had to go through him near the start of their Iron Man – which must have emptied the gas tank before they were even a quarter of the way into their journey!
For those that have never seen or met Big Mo, I’ll just give you the basics on him…he’s about 6ft3” tall, about 5ft wide, weighs 140kg (22 Stone!!) and is also very athletic, with a professional Rugby background.  Forget those statistics though, it’s not just his sheer size, it’s his natural strength.  If he was about ten inches shorter and ten stone lighter he’d still probably be the strongest in the gym.  He’s a lovely fella though, so I’m just glad he’s on our side!

So hopefully that illustrates what the four lads had to go through…on top of what is already such a physically demanding experience.  Mo was rag-dolling people without even meaning to.  I think he was trying to keep it light, but he’s just that strong that it’s impossible to avoid.  Coach Jason warned us of the danger of picking up any injuries once the people being Iron-Man’ed got fatigued (as their senses of when to use control are dimmed and their abilities to hold back aren’t the same – desperation can set in!)
I thought this might happen with Mo but it was ok, the atmosphere was always jovial.  Light-hearted tension did build around the room like, and it got to the point that when Jonesy eventually did tap him, it was like the villain being defeated at the end of a James Bond movie!

All in all it was a brilliant night down at the gym, and something you could be a part of yourself in the future if you fancy training Jiu Jitsu in the best place in Liverpool. 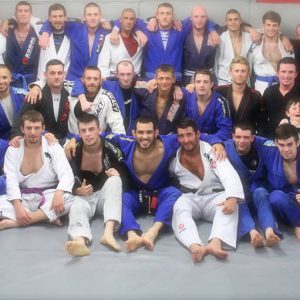 after the BJJ Belt Ironman

An example of the BJJ Ironman: