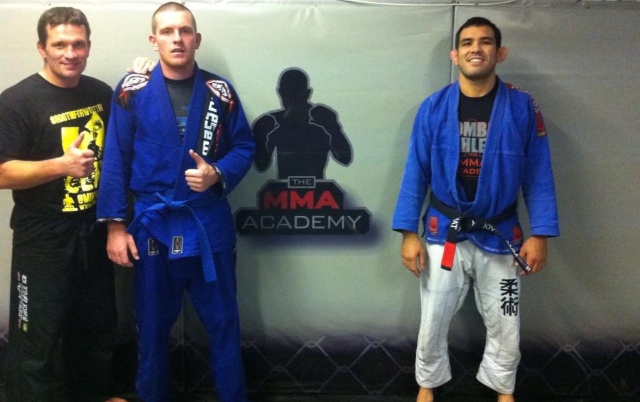 Mark Kinsella and his progress so far.

My name is Mark Kinsella or better known around the MMA Academy Liverpool as “Kinny, Kindecs, Francisco, Train wreck” think I will stop with the nicknames far to many.

I help run a family business and am a part time student at Liverpool JMU and have trained at the MMA academy since it opened and for a few months before the academy opened under Head coach Jason Tan. I am no athlete by any stretch of the imagination but have always stayed pretty fit going the gym but when training to run a marathon I had problems with my hamstrings and unfortunately had to give up on that ambition.

So after years of going the gym I got bored of the same old routine then I came across a film loosely based around MMA called Never Back Down (This film is terrible now I understand MMA). The training looked so interesting and different so after a few weeks of mulling over the idea I decided to find a local gym that did MMA. After a quick search I found a contact number of an MMA gym in Liverpool city centre and gave the number a call. After a quick chat with Jason Tan I decided to start in the BJJ class at 6pm. Now to say I was nervous is an understatement as I had all the stereotypical thoughts in my head of Cage Fighters being big pumped up guys trying to prove there manhood by knocking each others heads off and I had volunteered to try this?!?

So I needed back up incase one of them cage fighters tried anything, so I convicted my long time friend to come with me. Got to the class about one hour early regretting that decision in the car on the way there, I got over those nerves and was greeted by Jason Tan one of those cage fighters but he was very unassuming nice guy that helped settle the nerves a touch.

Then all the guys turned up to train and they all looked normally guys to my surprise and were very welcoming. We did some drilling of submissions which I was woeful at, then we rolled (sparring from are knees) at the end of the class. This was one of the strangest experiences of my life as I got submitted so many times its hard to put a number on it but when the class had finished and I had just had my backside handed to me I was already looking forward to the next class, I was hooked.

Jason Tan and Peter Davies opened The MMA Academy Liverpool, and I never thought this place would become my second home where I would meet all kinds of different people from different backgrounds that I now call friends. I attended the first BJJ class at the new gym and started doing Muay Thai under Peter Davies, a former British Thai boxing champion and I wasn’t any better at that but I persevered and started having Muay Thai privates with Peter, eventually I have improved.

So the next year or so passed me by just training and trying to improve my BJJ and Thai. I am unfortunately cursed with the clumsy genes and have no coordination and fall over my own two feet (size 12). But despite this I wanted to test my skills against guys from other gyms. So I entered my first BJJ competition in Manchester and upped my training to ensure I was ready for this. At the competition my weight division was called over and I was thinking it would be bad luck to be the first person called up to fight, only to have my name called out, just my luck. I submitted the guy in less than a minute though, a testament to the training I had been receiving, I managed to make it to the quarterfinals that day, the whole experience was really good!

Since then I have competed in many competitions and have won a few and medaled in most of them including one gruelling competition where I had 11 matches that near enough went the distance about 45mins of competition matches.

Since then the gym has expanded from 2 separate mats upstairs to a ground floor area with a cage and strength and conditioning section. There is a quote on the wall downstairs by Confucius “it doesn’t matter how slow you go as long as you don’t stop” which I feel is me in a nutshell as I am big slow and clumsy but try not to stop.

I was awarded my blue armband in Muay Thai last November from Peter Davies which consisted of controlled sparring for 45mins with fresh partners ever few minutes and this was one of the hardest thing I have ever done in my life but the sense of achievement out weighed the struggle.

I had being asking for a long time to fight MMA but was told to keep training improving and in March this year I was given the opportunity to represent the gym, an honour in itself. My first amateur MMA fight was at ACB and I trained hard for 6-8 weeks. I lost 11KG in about 6 weeks and fought at 84KG and won via first round TKO by ground and pound, after this I then fought in September on OMMAC at 80kg and won again, first round TKO by ground and pound. This achievement is only surpassed by the birth of my daughter and I never thought in a million years that I could fight MMA and win. 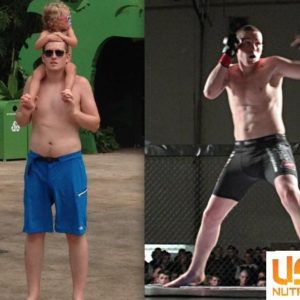 Not long ago I received my BJJ blue belt off Jason Tan after a 35-minute iron man which means I had to roll with every person in the class until one of us submitted, starting with the white belts and then working my way up to the black belts. This was another test of heart and of course technique and I was pushed to my limits both mentality and physically. 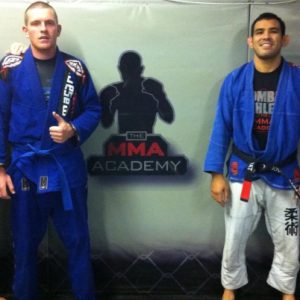 One of the reasons that I feel the MMA Academy has been a success is that even though martial arts competition is usually an individual sport we have a great emphasis on being a team here, and we all help each other improve, as you are only as good as your training partners.